Days of protest culminate in an attack on the British Embassy in Merrion Square Dublin.

Following the events on Bloody Sunday in Derry on 30 January 1972, thousands of protesters gathered outside the British Embassy in Dublin on 1 February in protest over the killing of thirteen civilians.

A group of protesters carried a burning coffin up the steps of the building to the front door. The coffin was emblazoned with the number 13, representing the 13 civilians who had lost their lives in Derry. As a group of protesters placed the coffin at the door of the British Embassy, one can be seen setting light to a Union Jack flag. Cheered on by the crowd, the protest erupted into violence when petrol bombs were thrown at the building and windows were broken. A gelignite bomb was hurled and blew the front door off. Fire fighters were prevented from getting through to the blaze by the thousands of protesters, and the flames spread destroying the building.

This RTÉ News footage shows the scene outside the embassy as the events unfolded on 2 February 1972. 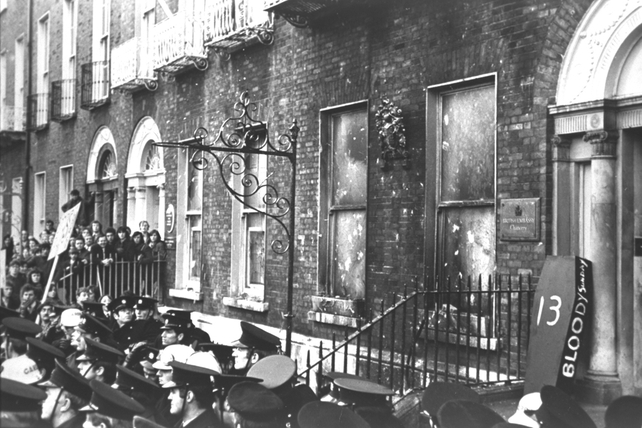