A new workspace for artists at the Temple Bar Arts Studios.

Jenny Haughton is the chief organiser behind the new Temple Bar Arts Studios. Jenny tells Youngline how she went about finding this new workspace for artists in a city centre location and based on the New York style loft spaces. Over the past six months, Jenny and her collaborators have set up spaces for artists to work in.

Painter Margaret O'Hagan has recently moved into the new studios and talks about how the bigger space has allowed her work to become bigger and describes the place as a "godsend".

At a cost of £25 per week, spaces are filling up fast in Temple Bar. Poster designer Robert Armstrong shares a space with his partner Joe Hanley. Royal Ballet dancer Tony Rudenko has rented space to teach contemporary and jazz dance classes which are held once a week. Peter Murray is one of Ireland's few slide archivists and runs his service from the Temple Bar studios. He is creating a comprehensive archive of contemporary art which he will make available to schools, colleges and galleries. Sculptor Catherine Carmen talks of the importance of having space for her work, which is something offered by the new space.

Youngline was a once weekly, half-hour magazine show for younger viewers. The first programme was broadcast on Tuesday, 23 November, 1976 from 5.30 to 6.00pm. Youngline continued until May 1984. 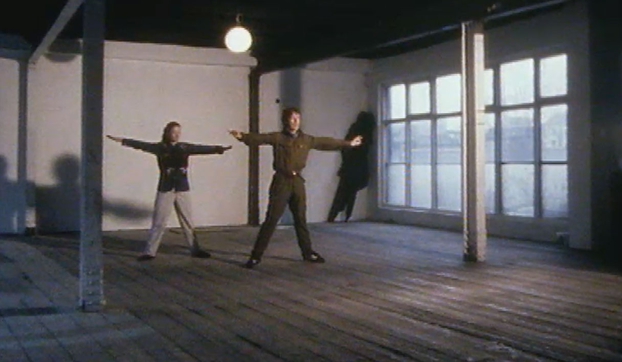