The Roscommon town of Elphin and its people are the stars of the opening sequence of 'Hall's Pictorial Weekly'.

The small town of Elphin in north County Roscommon is visited by the ‘Hall’s Pictorial Weekly’ film crew on 16 April 1977. Life on Main Street is recorded where people are busy going about their daily routine; often oblivious to the fact they are being filmed. Premises featured in this footage include Walkers, Geraghty's pub and Dockery’s Select Stores. 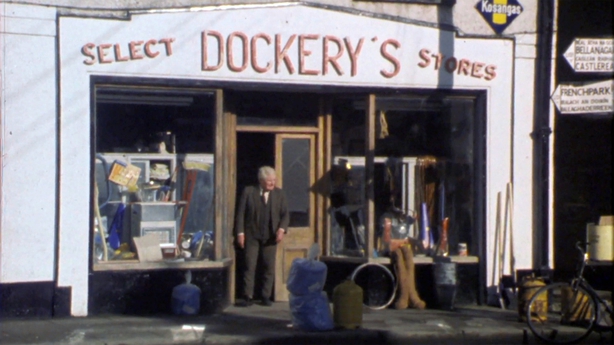 This short film of around one minute’s duration formed part of the opening sequence for that week’s episode. As it was not advertised as part of the programme billings in the RTÉ Guide or newspapers, people watched in the hope it was the turn of their town or village to have its moment of fame.

The series allowed Frank Hall to follow his own interest in the lives of viewers throughout the country.
Regarded as RTÉ’s flagship comedy show, it featured satirical sketches on current news stories and popular culture, as well as parody songs, comedy sketches, re-edited videos, cartoons and spoof television formats. The show ran for nine series until 1980.

This episode of ‘Hall’s Pictorial Weekly’ was broadcast on 27 April 1977.