People queue outside Bewley's on Grafton Street to have one last cup of coffee before the café closes for good.

Bewley's Café on Westmoreland Street opened for business in 1896 and the famous Grafton Street café has been in business since 1927. However the outlets are losing money and in October 2004 the Campbell Catering group, who bought the company in 1986, announced the cafés would be closing down with the loss of 243 jobs.

Before the historic outlets close for good, hundreds of people queue outside Bewley's on Grafton street to have a final cup of coffee. Bewley’s staff member Frances Humphries says her colleagues are very upset to be leaving but they are putting on a brave face. Some employees like Tattens have been working for Bewley’s for more than 50 years and Susan Graham never imagined she would ever leave Bewley’s,

I thought I’d be carried out of here in a box.

Customers in the Grafton Street café fondly recall their memories of Bewley’s,

If you had a boyfriend and he brought you into Bewley’s you were doing well.

Bewley’s management say they have done everything possible to save the cafés. The company's managing director, Cól Campbell says there is little chance of the cafés reopening.

An RTÉ News report broadcast on 30 November 2004. The reporter is Orla O’Donnell. 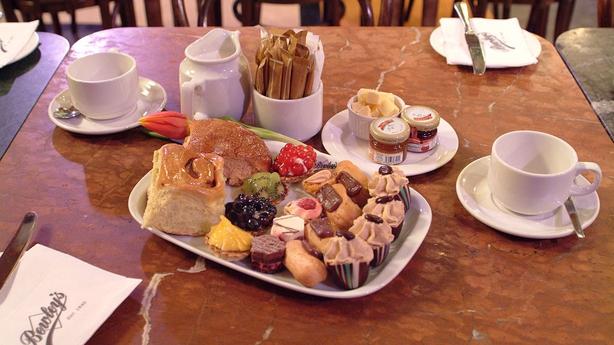