How would those who bear the brunt of the continuing rise in the cost of living control inflation?

'Seven Days' brings together seven people from different walks of life to come up with an acceptable programme of action on inflation. While all seven individuals live different lives, they are all impacted by inflation in different ways.

Any solution they produce in consensus should be politically acceptable to the rest of the country.

For Agnes Tynan, inflation means a change in the way her family eats and in her social life.

Gerry Traynor has not taken his wife out for three weekends as he saves for new pair of glasses.

Grace Murphy says the rise in the cost of living means she does not go out so often and will limit the number of children she has to two.

Lucy O'Brien is putting herself through college and finding it more difficult with higher fees, canteen and book costs.

For Sir Basil Goulding, inflation is creating higher higher costs eating into his capital and may mean he has to sell off land or paintings to keep up with the rising cost of living.

Old age pensioners Mr and Mrs Alex Miller shop around for bargains or search the streets for bits of coal. 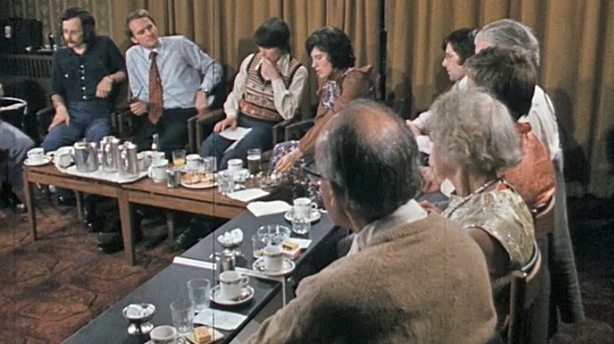 The seven participants meet up with two economists who have opposing views on how to solve the problem of inflation. John Bristow Professor of Economics at Trinity College and Ian Gough Lecturer in Social Economics must try to convince the seven panelists of the merit of their solutions. The panelists will then hammer out which aspects of each economists proposals they find acceptable. They must ultimately produce a consensus programme of action on inflation which would be politically acceptable to the rest of the country.

John Bristow is the first to set out his stall. He proposes a dramatic reduction in the rate of growth of government expenditure and a substantial increase in income tax. He believes both of these proposals will cause substantial unavoidable hardship specifically in terms of a rise in unemployment. He is in favour of adopting international monetary systems which inhibit the transfer of inflation from one country to another.

Ian Gough of the University of Manchester also sets out his programme of anti-inflation controls. His proposals centre around protecting the standard of living of the majority of the population through price freezes and rent controls; index linking of wages, pensions and benefits; protection of social services; and a guarantee of full employment. He believes that these measures will attack inequality and especially the incomes of the rich. Further proposals he recommends the nationalisation of ailing industries, investment planning in the interest of growth and regional balance, and control over international trade.

This episode of 'Seven Days' was broadcast on 27 September 1974. The presenter is Michael Ryan.