Up to fifteen thousand elderly people march on Leinster House in protest at the scrapping of the automatic entitlement to medical cards for the over 70s.

They travelled from every county in Ireland to the capital, and their message to the government was clear – medical cards must not be revoked from people over seventy years of age.

At the rally outside Leinster House, government TDs were heckled.  One protester who spoke to reporter Joe Little expresses his anger on the issue thus,

Well I think they’re the most stupid people that ever we had in the country, to do what they done, to old age pensioners, people that worked hard all their life.

The protest didn't consist solely of senior citizens.  Younger people are also present, in a show of solidarity with their parents and grandparents.  As this young woman says,

I just think it’s an absolute disgrace, what’s happening to them, and I gave my staff the day off to come here today in support of them.

Opposition leaders Enda Kenny and Eamon Gilmore also address the gathering, to speak out against the proposed cuts.

In direct response to this protest, the Fianna Fáil, Green and PD coalition government later revoked their plans to cut the automatic entitlement.

An RTÉ News report broadcast on 22 October 2008.  The reporter is Joe Little. 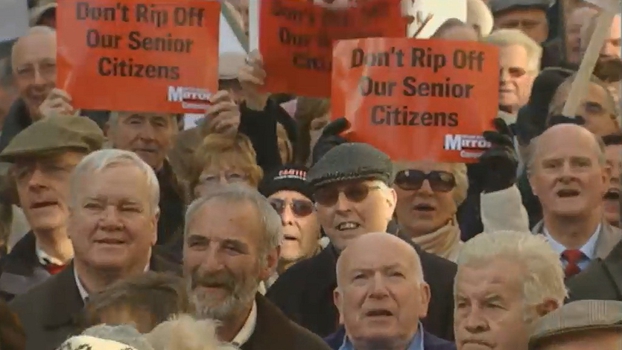