The price of a loaf of bread is to increase by twelve pence as a result of a cut in the subsidy and a decision by bakers to raise prices.

A standard loaf of bread will go up by twelve pence.

A standard loaf of bread will now coast fifty nine pence in Dublin. The price rise comes from a four pence increase imposed by bakers along with an additional eight pence rise as a result in the cut in the bread subsidy. 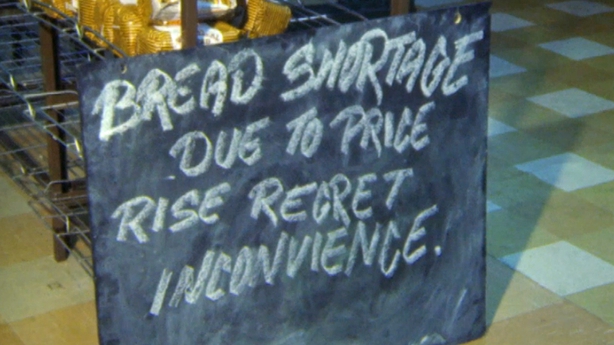 The price of bread was decontrolled over a year ago which means that price increases no longer require ministerial approval.

Secretary of the Irish Bakers' and Confectioners' Trades Association John McNabola explains that it has been twelve months since bakers increased the price of bread. In that time they have incurred many other cost rises including fuel and wages. These costs, according to John McNabola, ultimately had to be passed on the consumers.

Yesterday, a receiver was called into Boland's of Dublin, one of the oldest bakeries in the country where hundreds of jobs are now at stake.

An RTÉ News report broadcast on 4 August 1984. The reporter is Joe O'Brien.