Bono and Gavin Friday collaborate on a version of Peter and the Wolf in aid of the Irish Hospice Foundation.

A modern take on the Prokofiev story 'Peter and the Wolf' by rock star Bono, his children and his friend Gavin Friday.

The illustrations were all completed in one day by Bono and his daughters Jordan and Eve.

The art work has been on display to the public at Dublin City Hall for the last three days.

The illustrations form part of a book and CD package. The narration for the book is provided by Gavin Friday who teamed up with Maurice Seezer for the arrangement and performance of the Prokofiev story. 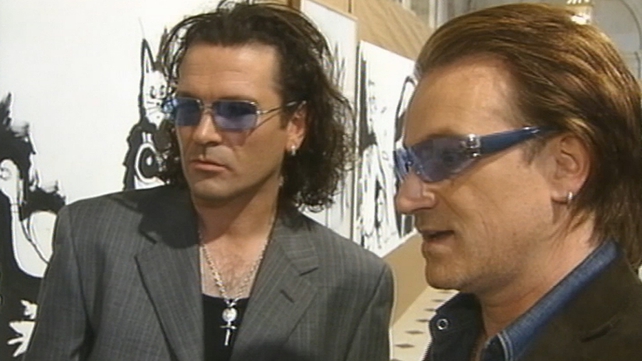 The package is available in bookshops for €20 with proceeds going to the Irish Hospice Foundation.

The original artwork is heading off around the world.

An RTÉ News report broadcast on 3 October 2003. The reporter is Anthony Murnane.