Highlights from the regional finals of the 25th Calor Housewife of the Year competition.

During the final of the 1993 'Calor Housewife of the Year' competition, broadcast live from the National Concert Hall in Dublin, presenter Gay Bryne introduces a compilation film showing some of the highlights from the regional finals of the completion.

During the interviews many of the women tell Gay Bryne how they met their husbands and a number of them are amused to recall that it was not exactly love at first sight. One woman remembers,

At the time he was a kind of wild looking character.

He could have done with a bath.

Aileen O’Connor describes how she accompanied her boyfriend. when he approached her father to ask for her hand in marriage. Aileen's father told them,

Alison Neylon won the 1993 ‘Calor Housewife of the Year’ competition. 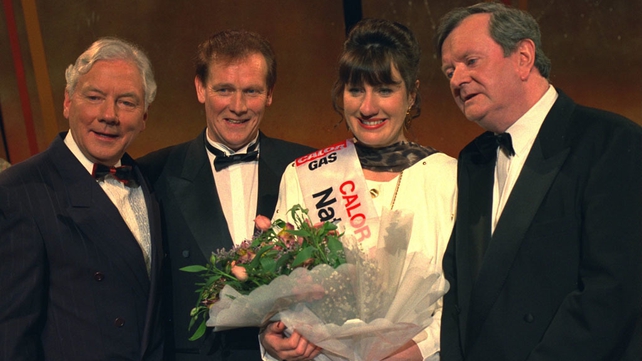 The final of the 'Calor Housewife of the Year’ was broadcast on 17 April 1993. The presenter is Gay Bryne.