'Newsbeat' profiles rising stars of the showband world 'The Arrivals'.

Bill O'Herlihy provides a profile of the Cork-based band 'The Arrivals' and examines how they make a living playing at venues throughout the country as they wait to hit the big time.  Right now, they're just one band among around seven hundred in Ireland.

They hope for bright lights, fame, and riches.

Each member of the band puts in fourteen hours a week in rehearsal, with performances and travel taking up another forty hours as the band travels around four thousand miles every month playing the clubs and dance halls around Ireland.  Band members include Beno Haussmann on drums, Billy Curtin on a variety of wind instruments,  Gordon Hanley on trumpet, organ, and sax, Tony Neenan on trumpet, Bill Ahern on bass guitar, Mick Ahern on lead guitar, and Des Lee on lead vocals.  Former musician Chris St Leger is the 'The Arrivals' manager. 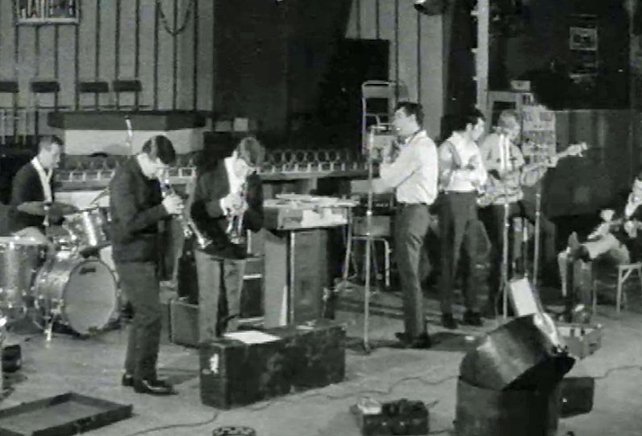 The Arrivals Showband in rehearsal (1967)

Bill O'Herlihy chats to the band about their plans and their hopes for success.

What a showband has to do is go out there and play what the people want.

This episode of 'Newsbeat' was broadcast on 10 October 1967. The reporter is Bill O'Herlihy.