The Franciscan College in Gormanston hosts a five day football tournament for boys teams from all over Ireland.

'Óg Sport Gael' is the name of the summer camp for boys aged under fifteen, and was attended by thirty-two teams representing almost every county in Ireland. Each team had won its county under 15 sevens competition and were accompanied by two managers.

The five-day camp included a seven a side tournament, as well as coaching sessions in football skills, long-kick and penalty competitions and some non-football entertainment.

Almost like the icing on the cake, the camp was attended by some senior county players including Jack O'Shea and Donie O'Sullivan of the Kerry team, and Brian Mullins of Dublin.

A team from Fethard, County Tipperary beat Oliver Plunketts from Kildare by a margin of two goals and five points to come out on top. 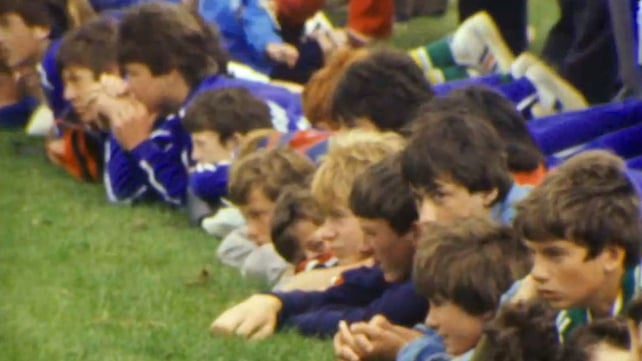 Supporters at the GAA Summer Camp (1982)