Ryanair launches a new service between Dublin and Luton and the first air fare war in Europe begins.

Ryanair, the "no frills" airline aims to reduce cross channel airfares with the launch of its new service to London Luton and claims that

Before putting a single plane on the route they managed to bring down airfares sharply.

The launch fare of £99 return is less than half the price of the British Airways and Aer Lingus lowest return fare of £209. Ryanair is awaiting confirmation of further licences from the regulatory authorities for the right to fly to Paris, Amsterdam and New York. The airline is also investing in equipment, looking at possible further fare reductions and predicting a reasonable profit for 1986.

Members of the Emerald Girls' Pipe Band play on the tarmac to celebrate the inaugural flight. 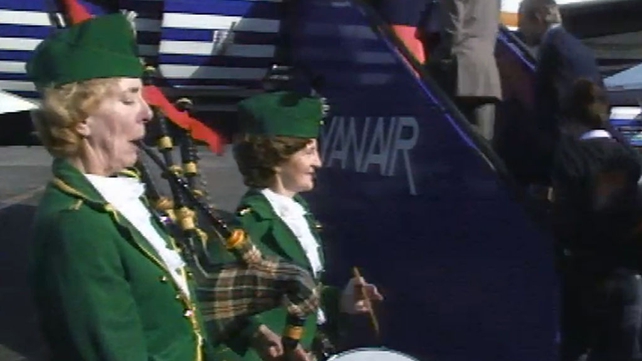 An RTÉ News report broadcast on 23 May 1986. The reporter is Michael O'Briain.

Flying from New York to Kerry 1995