In 1985 over 7 million 'Love Stamps' were sold in the run up to Saint Valentine's Day and it is hoped that this year will be no different.

In 1986 there was a competition for the design of the Love Stamps, which received over 4,000 entries. A Stamp Design Advisory Committee had the job of selecting just two winning designs.

The ultimate in togetherness

Terry describes the rationale behind his winning design.

The prize for the 22 pence stamp went to Ries Hoek, a graphic designer at RTÉ. Ries says his design represents a message of love. 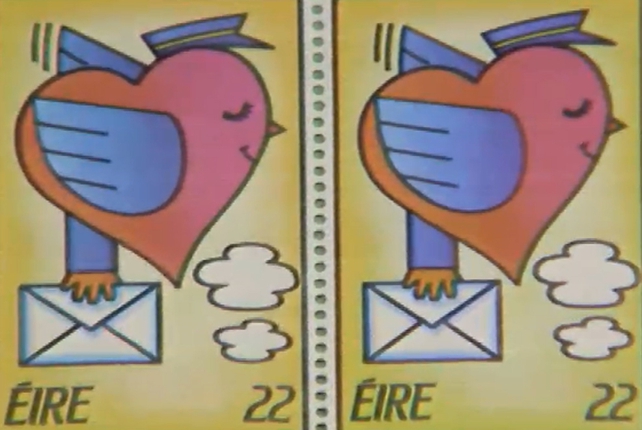 Thousands of post men like Billy Lanigan will be delivering messages of love in the coming days. The question remains who will be buying the stamps and sending those Valentine's Day cards?
Reporter Colm Connolly took to the streets to find out. The seaside town of Dún Laoghaire, traditionally a place where people with money retire to live in seafront hotels.