The first exhibition of the treasures excavated from the controversial Viking site at Wood Quay have gone on display.

Artefacts from 900 to 1300 AD are now on display at the National Museum.

Shane McElhatton interviews Pat Wallace - former director of the Wood Quay dig about his statement that many treasures were lost because the site was built on. He also talks about the kind of material the public can see at the exhibition and about the lives led by Vikings. The exhibition shows the Vikings as just ordinary townsmen as opposed to the image of the warrior that we are often presented with.

Pat Wallace describes some of the archaeological work carried out on the site at Wood Quay, which was the subject of a bitter row between conservationists and Dublin Corporation.

According to Wallace, Wood Quay is

A record of 180 buildings were recorded during the excavation.

An RTÉ News at One Thirty report by Shane McElhatton broadcast on 16 July 1985.

The accompanying photograph (above) shows Pat Wallace, Director of the National Museum of Ireland, in 1986, and excavations under way at Winetavern Street, Dublin in 1969. 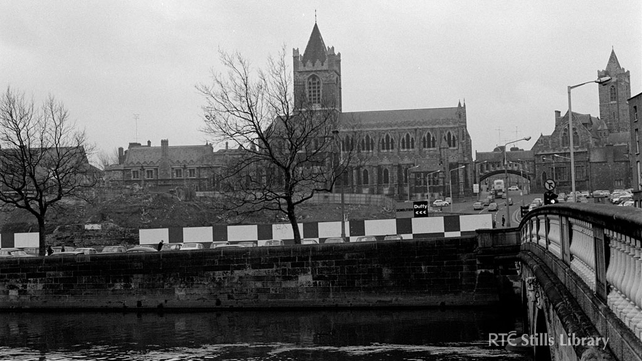