An alternative version of the '12 Days of Christmas' by Michael Twomey and Frank Duggan on Hall's Pictorial Weekly. The duo embraces the full spirit of Christmas at a staff Christmas party.

Mr. Whithers sings the seasonal number the '12 Days of Christmas'. This is an alternative version of the song. While the tune remains the same the lyrics are full of alcohol references. As he goes through the days of Christmas he gets more and more drunk.

This episode of Hall's Pictorial Weekly was broadcast on 15 December 1971. 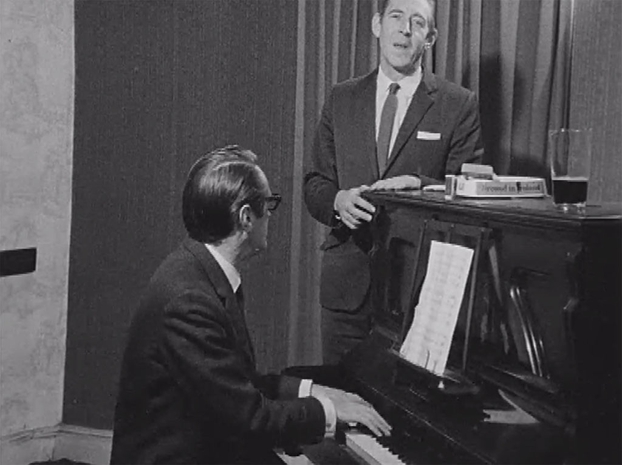 Visit the Christmas Past on RTÉ Exhibition

The series allowed Frank Hall to follow his own interest in the lives of viewers throughout the country. Regarded as RTÉ's flagship comedy show, it featured satirical sketches on current news stories and popular culture, as well as parody songs, comedy sketches, re-edited videos, cartoons and spoof television formats.

The programme ran for 9 series until 1980. In the RTÉ Guide on the week of its first transmission, Frank Hall wrote"the form and content of Hall's Pictorial Weekly should be impossible to forecast until the last moment. It should be as varied and absorbing as life itself". He further commented "I have an inexhaustible interest in the lives and times of the people who live in our country towns and villages; no event is too small to capture my attention, no community too out of the way... This programme is intended to be about you, your town, your friends, your local interests."
(RTÉ Guide, September 24, 1971, Vol.8, No.9, p.2)