Bill Whelan talks to Miriam O'Callaghan about his childhood in Limerick in this interview from 'Miriam Meets'.

The phenomenally successful Riverdance dance show began as an interval act for the 1994 Eurovision Song Contest, broadcast from the Point Theatre in Dublin by RTÉ. It was later expanded into a full-length show and has been touring the world ever since.

Composer Bill Whelan was born in Limerick city and raised in Barrington Street, near where the McCourt family lived as recorded in Frank McCourt's memoir, 'Angela's Ashes'. Both his parents were heavily involved in music and he grew up listening to a wide range of styles at home: "I recognised quite early that there was something about music that I just couldn't resist and that stayed with me all my life".

The photo above shows Bill Whelan during the recording of RTÉ Television's 'The Johnny Logan Special' in September 1980. The photographer was John Rowe. 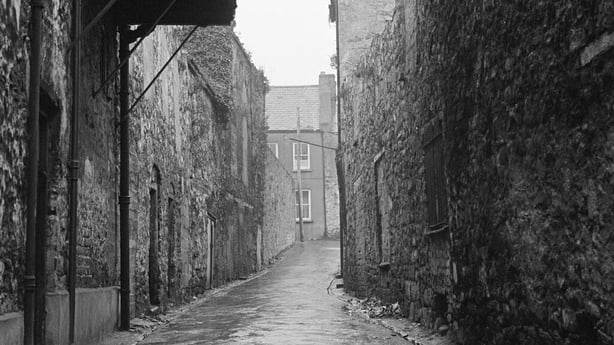 This photo of a laneway in Limerick City was taken by RTÉ photographer Des Gaffney in 1968.