Two members of the security forces killed during the rescue of kidnap victim Don Tidey.

On 24 November 1983 Quinnsworth executive Don Tidey was kidnapped from outside his home in Rathfarnham, Dublin.

On 16 December 1983 Quinnsworth supermarket boss Don Tidey was rescued from the IRA after being snatched on 23 November and held captive in a wooded area for twenty three days.

Having identified that the IRA were responsible for the kidnapping a massive Garda manhunt ensued and Tidey was tracked down at Derrada Wood, Ballinamore, County Leitrim. Private Patrick Kelly and trainee Garda Gary Sheehan were killed by the IRA during the operation to rescue Don Tidey.

Accompanied by his two sons Alistair and Andrew, and his daughter Susan, Don Tidey describes his time in captivity. 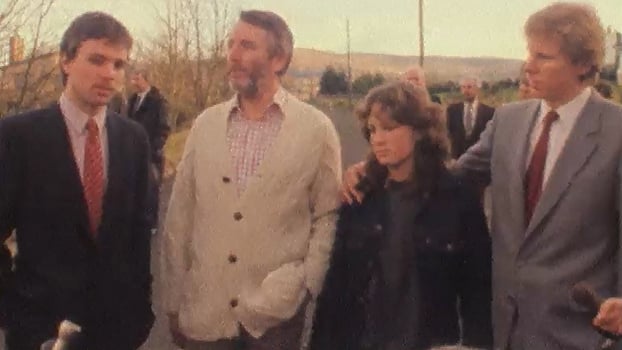 Don Tidey with his two sons Alistair and Andrew, and his daughter Susan (1983).