Born in Limerick in 1938 Terry Wogan began his career at RTÉ, first in radio and later as presenter of shows such as Jackpot, a light entertainment quiz show. Terry Wogan also commentated for radio on the visit of President Kennedy to Ireland in 1963. In 1966 he was approached by BBC and made the move to England where he has had a distinguished career in both radio and television.

In 1966 Terry Wogan visited Kinsale, County Cork for the 'Discovery' programme. Here he describes Kinsale and how it looks more like an English fishing village than an Irish one. The beauty of Kinsale has attracted many visitors from England and English accents can be heard about the town.

This episode of 'Discovery' was broadcast on 6 October, 1966. The presenter is Terry Wogan. 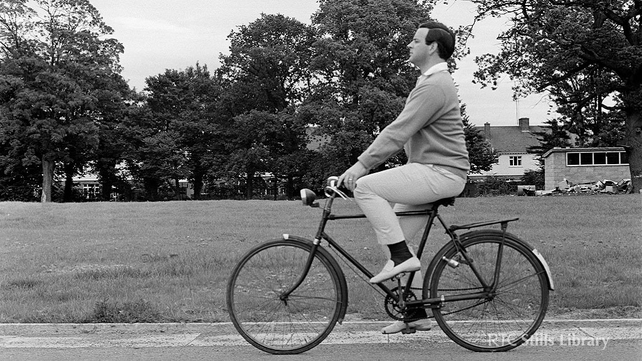 Broadcaster Terry Wogan on a bicycle, 1967