Thousands travel to Knock to see and pray at the relics of Saint Thérèse of Lisieux.

Thousands made the journey to Knock in County Mayo this weekend to pray at the relics of St Thérèse of Lisieux also known as 'The Little Flower.'

At the great basilica in Knock hour after hour people file past the relics of one of the Catholic church's most celebrated saints. Many of the pilgrims have come from the diocese of Down and Connor in Northern Ireland to pray for peace. Kathleen Short from Belfast says that Northern Ireland has had 30 years of violence and the people do not want any more.

Other pilgrims were praying that more young people would return to the practice of their faith. Sister Lyola from Macroom in County Cork says,

My dream prayer is for the youth of Ireland.

Organisers of the nationwide tour of Saint Thérèse's relics say that they are deeply moved by the fact that more than two million people have come to pray as the relics toured the country.

Fr Desmond Flannery, Chaplain for the tour says the response was enormous even in the small towns and villages.

The faith is there. Nobody can root the faith out of Ireland. It is there and it needs to be called to life again and she will do that. 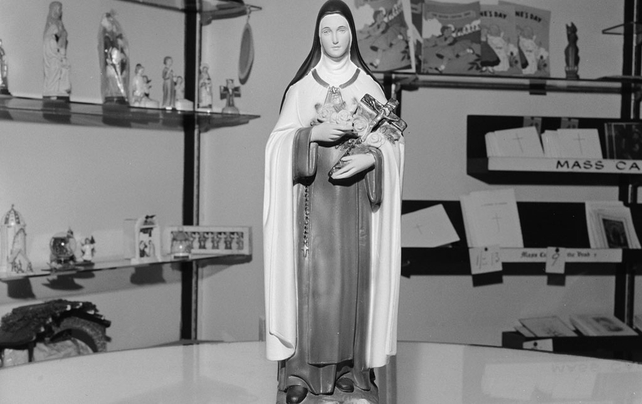 An RTÉ News report broadcast on 10 June 2001. The reporter is Jim Fahy.