Perceptions of homosexuality, identity and sexual orientation in Irish society.

With more people opening up about their sexuality and demanding reform of the laws in Ireland, the Irish Gay Rights Movement is gaining in strength.

'Tuesday Report' examines how and why gay people in Ireland are becoming more vocal and the possibility of the laws surrounding homosexuality being changed.

The men and women in this film look just like you and me. They are accountants, civil servants, students, shop-workers, manual workers, office workers. The only difference is that their sexual orientation is towards their own sex. They speak for themselves and seek our understanding.

In this excerpt from the programme, Irish men and women who have publicly come out as gay discuss the nature of homosexuality and the preconceptions that people have about them.

Jimmy describes both homosexuality and heterosexuality as a response of individuals to other individuals. He believes that perceptions some people have of homosexuals are ludicrous.

It is not a situation where homosexuals themselves are a mass of deviants who roam around the streets spotting people alone.

Cathal O’Shannon admits that he too has preconceived ideas about homosexuality. Much to the amusement of the group, which includes leader of the campaign for homosexual law reform David Norris.

I would have thought that most homosexuals would have been camp, prancing queens. 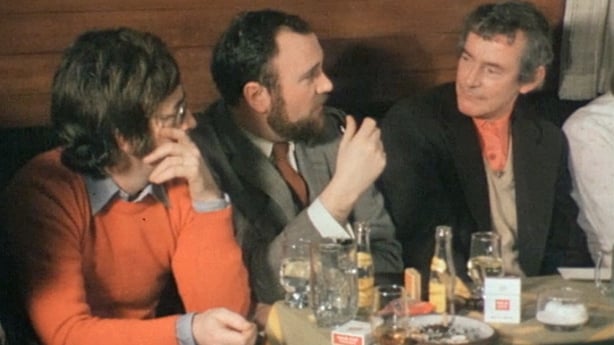 David Norris says homosexuality is just one part of an individual’s personality. He believes that if homosexuals are more visible, then they can break down the preconceptions. 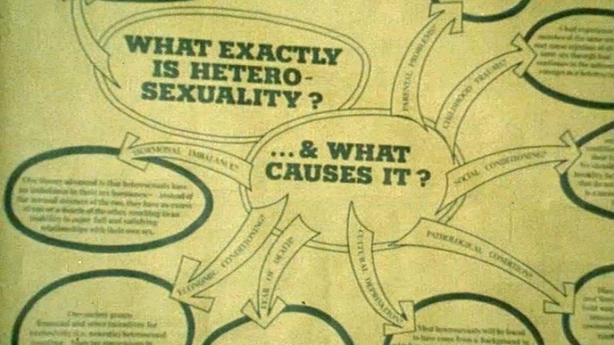 Poster on the wall of the Hirscheld Centre (1977)

After a visit to a gay disco at the Hirschfeld Centre, Cathal O’Shannon speaks to openly gay men and women who have no regrets about coming outl.

Sexuality of any sort is not easily discussed in Irish family circles, but many Irish mothers and fathers are having to face the fact that a son or a daughter is homosexual.

This episode of ‘Tuesday Report’ was broadcast on 22 February 1977. The reporter is Cathal O’Shannon. 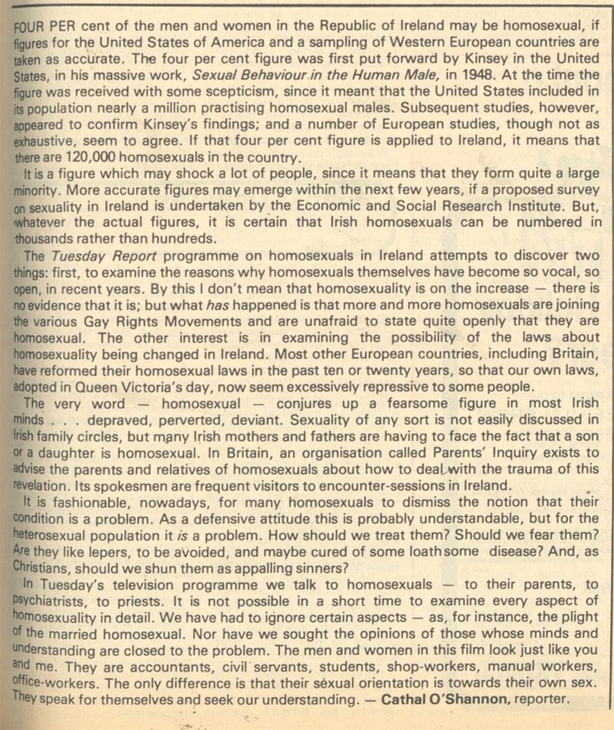