Burtonport celebrates Republic of Ireland progress at the World Cup and the part played by local man Packie Bonner.

Celebrations in Burtonport County Donegal, home town of Republic of Ireland goalkeeper Packie  Bonner. Following a one all draw in their final game in Group F with Holland the Republic of Ireland progress to the knockout staged of the World Cup Finals

We love you Packie, we do.

Following an early setback with a goal for the Dutch by Ruud Gullit after just ten minutes supporters nerves were frayed but an equaliser by Republic of Ireland's Niall Quinn in the seventieth minute meant qualification for the next round.

Fans appear to be optimistic about Ireland’s future in the World Cup.

We were the best. We’re going to go to the next stage and going to win the World Cup.

Others are complimentary of Packie Bonner’s skills and passion saying that he’ll save anything that comes at him.

Packie was brilliant. He pulled off fantastic saves.

After watching the match in the Kelly’s Arran pub, celebrations spilled out into the street with Packie Bonner's sister Cathy joining in and contemplating heading out to Italy herself. 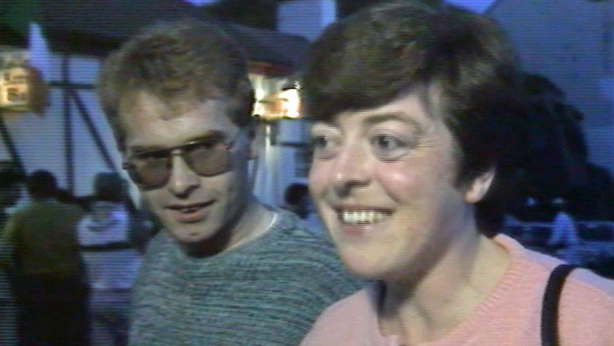 Packie Bonner is the best in the world.

An RTÉ News reports on 22 June 1990. The reporter is Eileen Magnier.