The life of a typical Irish family in the early 19th century relied on simple foods and homemade clothes.

'Telefís Scoile' looks at the working life of a family in Ireland one hundred and fifty years ago, and how spinning wheels kept the wolf from the door.

Clothes today are mass produced in factories using synthetic fibres, but in the early nineteenth century Irish people wore garments made from linen and wool, commonly made at home.

Sheep were shorn by hand, and the wool spun into yarn. Flax grown in the fields was harvested and using natural methods was prepared for spinning.

Most homes in rural Ireland had a spinning wheel, a device which played an important part in the economy of the countryside. It provided a source of extra income for cash-strapped families, enabling them to buy small luxuries such as tobacco, snuff, salt and whiskey. Spinning was work carried out by the woman of the house, in addition to all her other household tasks,

The man wasn’t busy all the time, but his wife hadn’t a minute to spare.

A one roomed cottage was where the family lived, with a dresser, beds under which potatoes were stored, and a chest for clothes.

The family got up when the cock crowed, and the man of the house worked from six o’clock in the morning until eight o’clock in the evening, or later if required by their master.

Spinning wheels differed from region to region. In Connemara the spinner worked standing up, while in the Blasket Islands she sat down. On a fine day the spinning wheel was brought outdoors, and it was customary for women to sing while they spun the wool or flax.

As children also worked in the home and on the family farm or smallholding, it was their job to card the wool. This was done by combing the raw wool between two paddles studded with iron bristles.

Generally people had two meals per day, the main one being in the evening. Stirabout was a porridge made from oatmeal or cornmeal boiled made with water or milk. Brown bread was also eaten, as were potatoes, cabbage and fish. Some families are recorded as having just one substantial meal a day.

People lasted two days on one meal of the kind, if they needed to.

After the meal, the rush light, candle or oil lamp was lit, and neighbours would call in to tell stories, a game of cards or a singsong, and would be offered whiskey or poteen. 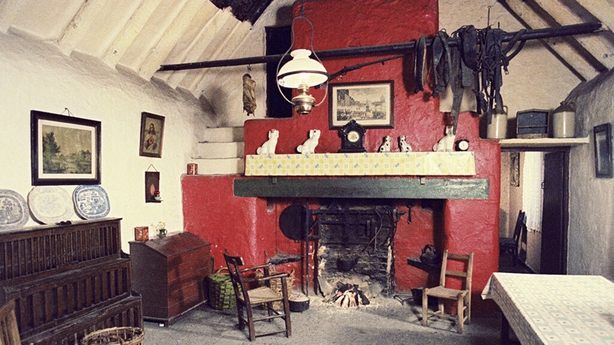 If the women were tired from spinning they would take up their knitting needles. The best wool was kept to knit socks for the head of the household, as remembered by Malachi Horan from Killinarden Hill in County Dublin,

Them stockings would wear at the hardest work, for two years or better, and never a hole.

The neighbours would leave around midnight, and the family would get ready for bed and awake the following morning ready for another day’s work.

This episode of ‘Telefís Scoile’ was broadcast on 4 December 1969. The presenter is Brendan Scott.