With its sandy beaches, fishing villages and beautiful scenery, the most southern part of County Wexford is scattered with Norman castles and locations where history was forged, and Ireland’s fortune changed.

The small fishing village of Ballyhack with its car ferry transporting cars and pedestrians to and from Passage East across the River Barrow, is overlooked by a fifteenth century tower house built by the Knights Hospitallers of St John, a Catholic military order later known as the Knights of Malta.

They took over the duties and lands of their rivals the Knights Templar following the order’s dissolution in 1307. The Hospitallers had  two other stone towers on the Hook Peninsula at Kilcloggan and Templetown.

Billy Colfer explains how the land was granted to the Knights Hospitallers by William Marshall, Earl of Pembroke. He was also Strongbow’s son in law, and the man who built the lighthouse tower at Hook Head. He brought the Knights to Ballyhack

Baginbun headland, where Celtic tribes built a fortification known as Dún Dónaill, overlooks a beautiful sandy beach, frequented by both locals and the many visitors to this part of the sunny south east. This tranquil part of the peninsula has a dramatic and violent past.

It was here that Raymond le Gros FitzGerald landed with only a hundred or so soldiers in 1170, and changed the course of Irish history,

At the creek of Baginbun, Ireland was lost and won.

Centuries later a Martello tower was constructed on the headland circa 1805, as part of the British crown’s defence against a possible invasion by Napoleon Bonaparte.

Nearby Slade is picturesque fishing village where catches of lobster, crab and mackerel are landed. It also has a castle, built by the Anglo-Norman Laffan family in the 15th century, who made their fortune from fishing and trading.

The castle and adjacent lands passed into the hands of the Loftus family in 1666, and it was they who constructed the harbour in 1684. Ten years later salt works buildings were added, but this industry had gone into decline by the nineteenth century. 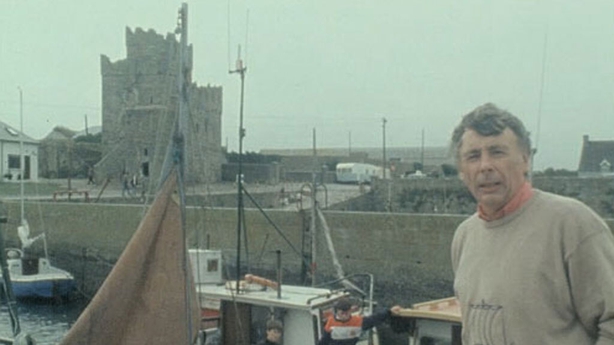 The village of Fethard-On-Sea (the latter part of the name added in the early twentieth century to differentiate it from Fethard in County Tipperary) is another place owing its existence to the Norman invasion,

The castle and the tower being the only mediaeval part remaining, was used mainly as a summer residence for the Bishop of Ferns, but after the Reformation became part of the Loftus family’s estate.
The adjacent St Mogue’s Church, dating from 1684, was rebuilt in 1837, and is the final resting place of Alexander Devereux, the last Abbot of Dunbrody Abbey.

This episode of ‘Súil Thart’ was broadcast on 7 October 1989. The reporter is Nuala Ní Dhomhnaill.