Martin Cahill appeared at the Four Courts accused threatening to burn down the house of his elderly next door neighbours. Martin Cahill who was at the centre of a four month Garda surveillance used a decoy to try to fool photographers and cameramen. While in court he wore a wig, false moustache and glasses.

Following the adjournment of his case, Martin Cahill left the court and issued a short statement to reporters. Wearing a balaclava he sang and danced while removing his clothing to reveal a Mickey Mouse tee shirt and boxer shorts. 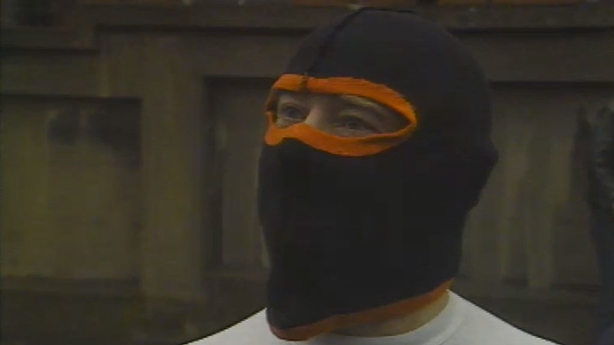 Martin Cahill was then arrested and later released.

Shortly after he speaks to Una O’Hagan, who puts it to him that if he were innocent of alleged crimes, he would not need to wear a balaclava. Martin Cahill does not agree,

Maybe if I was guilty I probably wouldn’t. Seeing that I’m innocent, I do.

An RTÉ News report broadcast on 14 April 1988. The reporter is Una O’Hagan.