The Giant's Causeway on the Antrim coast officially becomes a World Heritage Site one of fifty areas of the world to receive this status from the United Nations.

At a ceremony held at the Giant's Causeway visitor centre an inscribed basalt rock was unveiled by writer and broadcaster Magnus Magnusson.

The unusual structure of the rocks and pillars on this section of the County Antrim coast have given rise to many legends. One is that the causeway was built by none other than the mythological Irish warrior Finn McCool, who was having a fight with a neighbouring Scottish giant. Another legend tells of Finn McCool’s attempt to rid himself of his Scottish foe once and for all. He dressed himself like a baby, and when the Scottish giant saw him, he took fright and ran off.  If this was the size of the baby, how big was the father? 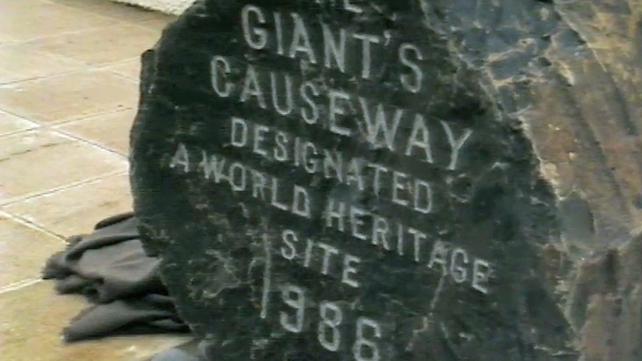 In geological terms, the story of how the Giant’s Causeway came to be is not quite as dramatic. Magnus Magnusson explains,

It was formed something like 58 million years ago, I’m told by geologists, as a result of tremendous volcanic effusions of molten basaltic rock.  This kind of basalt has got one curious thing about it.  It cools rather slowly, and it’s this cooling that’s cracked the rock into these many-sided pillars, with the jointing every sort of 30 centimetres or so... just like the vertebrae of a human being...

The causeway was declared a World Heritage Site by the World Heritage Convention, which provides for the protection of cultural and natural properties of outstanding universal value. With the causeway now firmly established on the international map, it is hoped that recognition of its unique structure will lead to a greater influx of tourists to the area.

An RTÉ News report broadcast on 21 April 1987. The reporter is Emer Murphy.