In this sketch for ‘The Live Mike’, Dermot Morgan posing as the presenter of a wildlife show ‘Zoo Time’ investigates how to train a particularly difficult breed of wild animal, the rugby union prop forward.

Barry, the prop forward is played by Fran Dempsey,

A particularly fine example of the species, he’s fully mature at 33 caps. 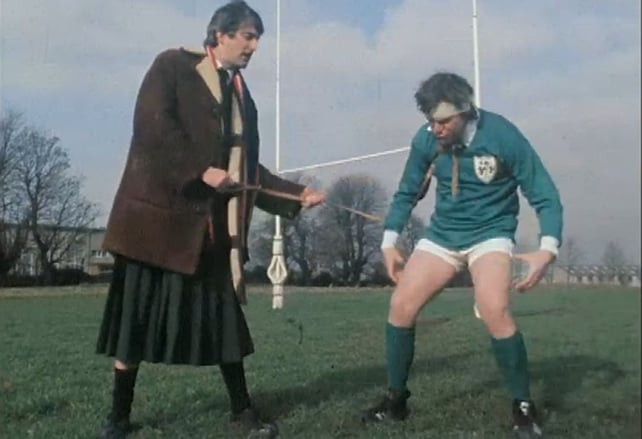 Morgan points out the physical features that make Barry such a fine specimen. These include a jutting jaw, a mallet head and

A high forward which he has toughened up by banging his head of a wall in training over a number of years.

To become a proven thoroughbred prop forward, Barry has to be put through a series of difficult tests, including the wall test, the door test and the corridor run.

Finally a copy of 'Einstein’s Theory of Relativity' is used to check against any latent intelligence. Barry grasps the book and kicks it straight between the posts.