Sales push is quite a crush as Dublin shoppers are ready for post Christmas bargain hunt.

When the doors to Arnotts opened, shoppers surged into the department store swamping the 400 sales assistants on duty. It was a bumper day for the store which took a record £75,000 from the 50,000 bargain hunters who passed through the doors.

According to the manager the best bargains included out-sized men's shoes and carpet ends but there were also good buys to be found in ladies coats. One woman was pleased to purchase a coat for £9 reduced from £17, although she,

Nearly got squashed to death coming in.

Most people were happy to endure the pushing and jostling in a bid to bag a bargain. Although not everyone was impressed. A disillusioned shopper, back in Ireland after living in Canada for the last 16 years complained,

Sales fever usually lasts for three days and then tapers off to normal shopping levels after that.

An RTÉ News broadcast on 29 December 1971. The reporter is Don McManus. 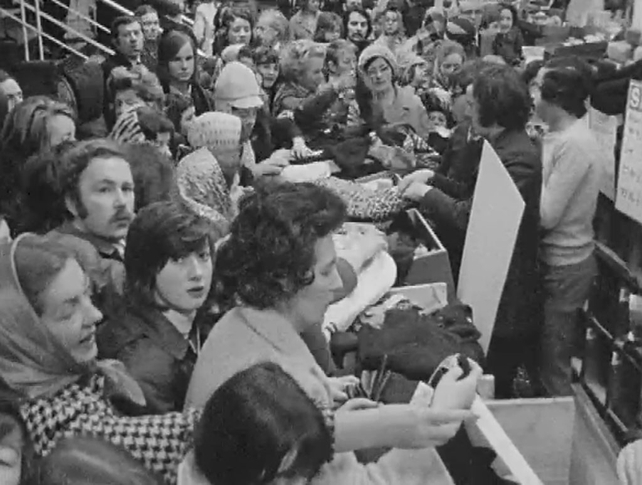