Cathal O'Shannon visits Malahide to learn about the history of its unique Presbyterian community.

Evidence of this association could be found in the religious hierarchy where Catholics were not allowed to join the nearby 'Island Golf Club'. According to Inglis the so-called 'In-Denomination' was the Church of Ireland but it is unclear where the Presbyterians stood in this social hierarchy.

The first Presbyterian community in Malahide was largely made up of "Scottish herring women", who spent three or four months each year gutting herring. Other Presbyterians worked as servants in Malahide Castle and some ran their own businesses. Whatever their social ranking, there was the core of a Presbyterian community. They came together to worship in a house known as 'Casino' and later Mr James Dickie bought number 3 Killeeen Terrace where worship took place in the drawing rooms each week.

By 1956 the number of Presbyterian families in Malahide had increased and as a community they decided to acquire a church. On 25 November 1956 the building of the Malahide Presbyterian Church was completed at a cost of £9,400, largely funded by the community. The church and crèche were designed by a member of the congregation Mr William Beare and the stained glass window commemorates Mr Dickie, the founder of the Malahide congregation.

At a time when the Church of Ireland was disposing of many of its buildings, it was unusual to see the completion of a new church which was not a Catholic church.

Malahide is the first Presbyterian church built in the Republic this century. 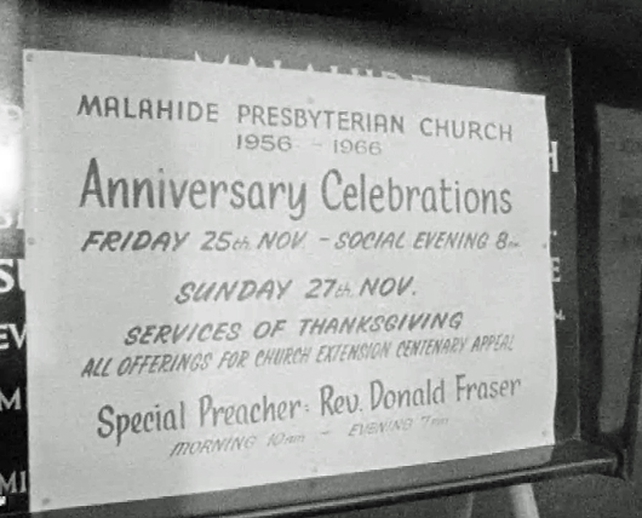 This episode of 'Newsbeat' was broadcast on 25 November 1966. The presenter is Cathal O'Shannon.