John Cleese talks about about the Monty Python comedy group and his comedy series 'Fawlty Towers'.

John Cleese cites an absurd situation with the owner of a hotel in which the 'Monty Python' group were staying as the inspiration behind Basil Fawlty, the owner of the fictional Torquay hotel in 'Fawlty Towers'. Co-written with his wife Connie Booth, who also plays Polly Sherman in the series, 'Fawlty Towers' has become phenomenally successful which comes as a relief as he was,

Hoping it wouldn't be too much of an anti-climax after 'Monty Pyton'.

Recounting a story told to him in by a man in Norway who had to remove the body of a deceased guest from his hotel. He would love to see Basil Fawlty deal with a similar situation and indeed this storyline appears in season two of 'Fawlty Towers' broadcast in 1979.

A public schoolboy who attended Cambridge University John Cleese did not set out for a career in comedy. However in Britain, it is not unusual for Oxbridge educated people to be involved in the arts and many of them now control television, radio and repertory theatres in England.

John Cleese gets fed up with things quickly and agrees the strength of 'Monty Python' and 'Fawlty Towers' comes from knowing when to end the series.

If you go on working at something, when you've really cracked it, then first of all the audience gets bored, maybe shortly after you do...and you're only doing it for your bank manager anyway.

This episode of 'Last House’ was broadcast on 14 September 1976. The reporter is Tom McGurk. 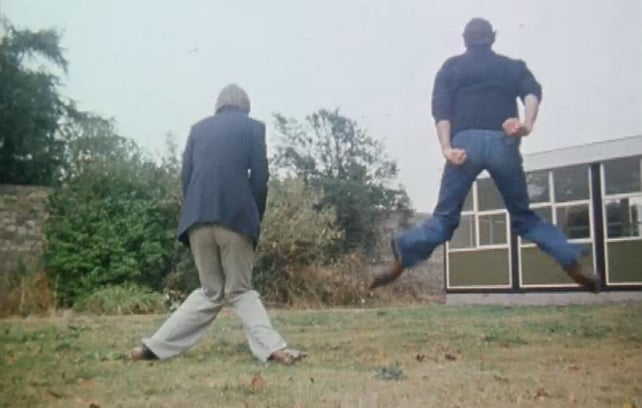