The accompanying photograph shows Jim Larkin (1876 – 1947) addressing a crowd on Dublin's O'Connell Street, shortly after his return from America in 1923. He is standing above a small crowd of men, with his arms raised. This pose was adapted by sculptor Oisín Kelly for his statue of Larkin on O'Connell Street.
© RTÉ Stills Library 0511/017
This photograph is taken from RTÉ's Cashman Collection. 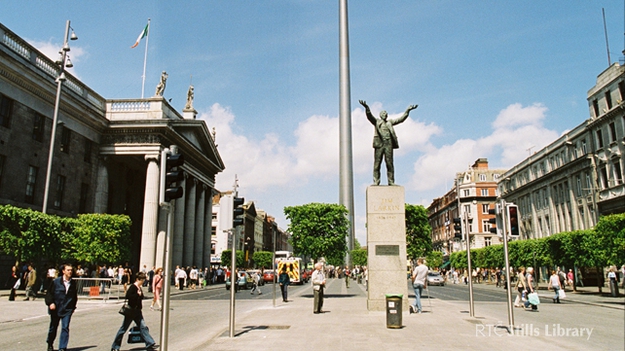 Also presented here is Oisin Kelly's statue of Jim Larkin on O'Connell Street, Dublin from the RTÉ Archives photographic collection. This photograph was taken by Thomas Holton on 26 May, 2004.
© RTÉ Stills Library 2069/064

Born in Liverpool to Irish parents, Larkin first became involved in the labour movement in that city. He moved to Ireland in 1907 to work for the trade union movement here. Larkin founded the Irish Trade and General Workers Union (ITGWU) in 1908 and helped form the Irish Labour Party in 1912. He is best-known for his role in the 1913 Dublin lock-out, in which employers attempted to force workers to leave the ITGWU. After this dispute ended he spent some time in America, returning to Ireland in 1923. Larkin also founded the Workers Union of Ireland (WUI) in 1924. He was active in politics in Ireland for the remainder of his life, serving as a councillor for Dublin Corporation and a Labour Party deputy in Dáil Éireann.