Ahead of the awards on November 28, people can vote for their favourite read across 15 categories including Novel of the Year, Crime Fiction, Children's Book and Cookbook at irishbookawards.irish.

Voting closes on Thursday November 23 at midday. Highlights of the awards will be shown on RTÉ One on Wednesday November 29 at 9.30pm.

Speaking to RTÉ Entertainment as the nominees were announced at the Bord Gáis Energy Theatre in Dublin on Thursday, Ryan Tubridy said that being nominated for his children's book Patrick and the President was "the icing on the cake".

"I've had so much fun with PJ [Lynch, illustrator] going around the country, going to book festivals, going to talk to kids, encouraging people to read more, encouraging them to learn about the past more," he said.

"I'm evangelical when it comes to reading and books. To have a book out for kids was lovely; to get an award nomination is very, very flattering. It's been a lovely experience, all told."

With Tubridy's RTÉ Radio 1 show sponsoring this year's Listeners' Choice award, the presenter also paid tribute to the other shortlisted authors. "There's a room upstairs and it's just full of young and interesting and vibrant people, who are being creative," he said. "This is a great country for writers and dreamers."

Stefanie Preissner, who is among the nominees for Popular Non-Fiction Book of the Year for Why Can't Everything Just Stay the Same? admitted that being shortlisted had taken her completely by surprise - because she didn't know about the Irish Book Awards.

"Then I went on and I looked at people who had been nominated last year and people who had won and I was like, 'Oh my God...' Because I still don't see myself as an author or a writer of books - I'm a screenwriter, that's my thing, and this is kind of an extra.

"This is unbelievable. I feel like someone is going to walk around the corner of the Bord Gáis and say, 'Hey you! Get out!'"

Ruth Fitzmaurice, who is shortlisted for Newcomer of the Year for her memoir I Found My Tribe, said the reaction to the book has been "phenomenal".

"I get these lovely letters from people that just say, 'Ruth Fitzmaurice, the lady at the Cove in Greystones'. These beautiful, warm letters - some of them are sad and some are happy. Surprise letters are my favourite thing."

Echoing the sentiments of all the shortlisted authors, model and blogger Roz Purcell expressed her gratitude that people had taken the time to enjoy her cookbook, Half Hour Hero.

"When I was first approached to publish a book I was kind of overwhelmed - particularly when you realise the amount of work that goes into a book!" she said.

"I'm on my second book now and it's just as exciting as being nominated. Not many people get to be in this position, and I'm very grateful."

Nominees at a Glance:

Non-Fiction Book of the Year
In America: Tales from Trump Country - Caitríona Perry
After Ireland - Declan Kiberd
Alfie - Trevor White
Brexit and Ireland - Tony Connelly
Wounds: A Memoir of War & Love - Fergal Keane
I Am, I Am, I Am - Maggie O'Farrell

Young Adult Book of the Year
Spellbook of the Lost and Found - Moira Fowley-Doyle
Perfect - Cecelia Ahern
Moonrise - Sarah Crossan
Like Other Girls - Claire Hennessy
Tangleweed and Brine - Deirdre Sullivan, illustrated by Karen Vaughan
The Girl in Between - Sarah Carroll 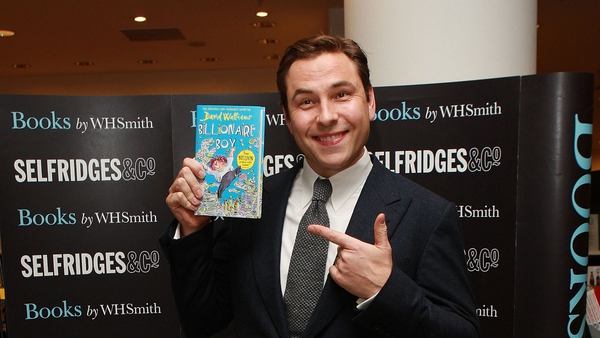