A look at the people and city of Cork on its 800th birthday.

Cork celebrates eight hundred years since it was granted a charter by Prince John in 1185.

When Oliver Wendell Holmes said the axis of the world runs through every town and village, he could have been thinking of Cork.

Historian Dr Sean Pettit believes the most beautiful thing about Cork is that it is a celebration of people, similar to all other Irish and European cities each has its own distinctive characteristics.

The most beautiful thing about any city is that it is a celebration of the life of people.

Sean Pettit describes Cork people as vivacious and having a strong sense of identity with their city.

They really love this place with its warts and all. 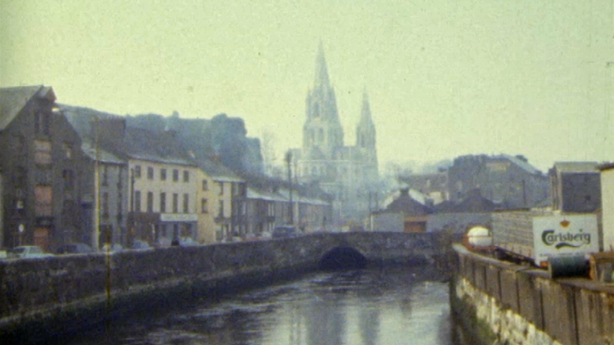 One of the negative images of the people of Cork is that they are clannish. There may be some truth to this but when the barriers are broken and they let you in, they will take you over.

Cork people are an enigma. Beneath the thin veneer of sophisticated nonsense, there's warmth. They're countrified and even shy but most of all they're proud of their roots.

Donal Crosbie, Vice President of the Cork Examiner says everyone has a loyalty to where they come from. He describes Cork as having a continental flavour because of its maritime connections, similar to places like Devon and Cornwall.

Donal's brother and Chairman of the Cork Examiner, George Crosbie, believes that people from Cork are very loyal to the city.

Performer and entertainer Paddy Comerford describes the difference between Cork and Dublin in terms of a different sense of humour, the dialects, and the moods.

An RTÉ News report broadcast on 7 February 1985. The reporter is Peter McNiff.