Amnesty International wants the Irish government to admit that rendition flights operated by the United States government are passing through Shannon Airport.

On the United Nations International Day in Support of Victims of Torture, Amnesty International wants the Irish Government to admit that Ireland is permitting extraordinary renditions to take place.

Amnesty International says that the State is facilitating uninspected US Central Intelligence Agency (CIA) flights through Irish airspace. Amnesty believes Shannon Airport is part of the United States rendition circuit that sees detainees being brought to detention centres such as Guantanamo Bay, where they are subjected to torture or degrading treatment.

Colm O’Gorman of Amnesty International Ireland compares the situation to a drug trafficker travelling through Shannon in a private plane, who tells the Irish Government that there is nothing illegal on board, 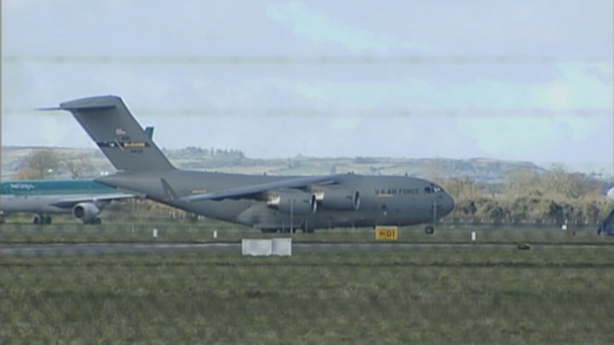 I do believe that extraordinary rendition is not taking place through Ireland at the moment.

A cabinet sub-committee which was set up last November to review the law on searching suspected rendition flights at Shannon has met only once so far.

Amnesty International wants it to strengthen legislation which will give Gardaí the power to inspect flights at their own discretion, and for the committee to make its findings public.

An RTÉ News report broadcast on 26 June 2009. The reporter is Conor Mark Kavanagh.