After many years on the move Gaelscoil Inse Chór finally has a permanent home at Islandbridge in Dublin.

Gaelscoil Inse Chór has been without a permanent home since it was founded in 1977.  During that time pupils and teachers have had to use classrooms in other school premises in Crumlin, Templeogue and Walkinstown.

Now at last they have a home to call their own.

Today, in a symbolic link with the past, former school pupils performed the opening ceremony.  For principal Con Ó Tuama, this day is the culmination of years of hard work for the school community.  He pays tribute to all involved, including

A special thanks would have to go to all those parents who have stayed behind this while we were in exile. 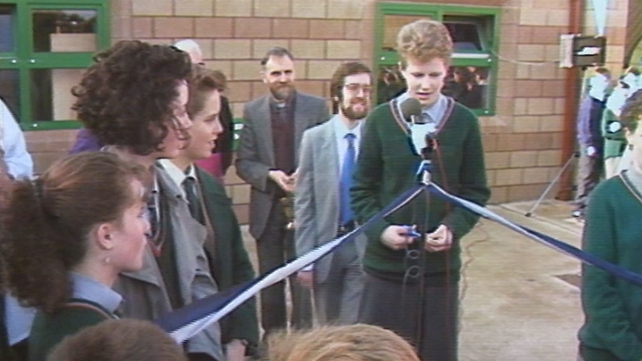 An RTÉ News report broadcast on 27 October 1988.  The reporter is Áine Ní Fhéinne.