Hundreds of Daniel O'Donnell fans have flocked to the village of Kincasslagh in County Donegal for the opening of the country star's hotel.

Gardaí in the sleepy village were called in for crowd control and traffic duties as droves of sightseers arrived for the opening event.

Speaking about his new venture, Daniel O'Donnell says that Irish singers have a great platform to promote Ireland.

My belief is that once you get them to Ireland, they will come back.

Daniel O'Donnell, who has sold around two million records, is now valued as one of Donegal's best tourist assets. 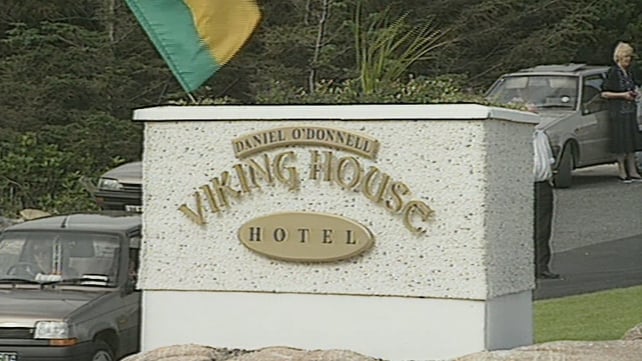 According to hotel manager John Doogan, the hotel is already seventy per cent booked up until January and bookings are coming in steadily.

Likened to a pilgrimage, Daniel O'Donnell tourism will see more and more busloads of fans from all over Ireland, England, Scotland and Wales travelling here.

An RTÉ News report broadcast on 5 July 1993. The reporter is Eileen Magnier.