A farmer in the west of Ireland is looking to ensure that small family farms across the country are allowed to survive.

The aim of the league is to ensure that small family farms are allowed to survive.

Joe Molloy got involved in the National Land League to fight the injustices endured by many small farmers. Many small farms are being bought up by the rich who exploit the land for quick profit. Joe argues that government legislation is required to if the small farm is to survive.

80 per cent of all the farmers of this country are small farmers and 60 per cent of those would be part-time farmers.

Many small farmers need to have part-time jobs or draw the dole (Farmer's Aid) as they cannot depend fully on farming for their livelihood.

The modern Land League began in the sixties and was led for fifteen years by Dan McCarthy who championed the cause of his fellow small farmers. The League has had close associations with trade unions often sharing a platform with them. Land division and redistribution is the area of most concern for the Land League and protest marches against foreign investors and speculators became commonplace amongst its members during the sixties. 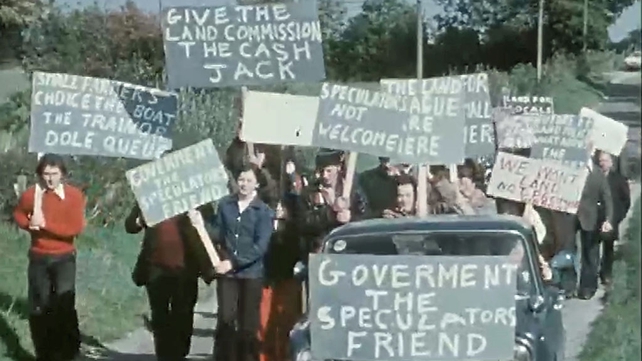 The IFA represents the rancher and the big, rich farmer.

Joe describes how in this area of Connemara over the past sixty years, over a hundred houses have been closed forever with families having to leave the land due to economic pressure. Joe would welcome industry to the area to provide additional employment to allow small and part-time farmers to remain on the land.

'Ireland's Eye' reports on 10 March 1983. The reporter is Mairead McGuinness.