At 3.00 am on the morning of 5 May 1981 Forbes McFall reports from the Twinbrook Estate in West Belfast, announcing the death of Bobby Sands.

In the last hour news has filtered through to this community that Bobby Sands has died after sixty six days of hunger strike.

He goes on to read a short statement from the Northern Ireland Office.

Mr Robert Sands, a prisoner in the Maze Prison, died today at 1.17. He took his own life by refusing food and medical intervention for sixty six days.

However to others Bobby Sands was a republican martyr. As the news spread of his death across West Belfast, the local community engaged in a ritual "republican call" by banging dustbin lids on the roadside to alert others of the news. While many stayed in bed, teenagers built barricades in the streets in

Another night of hijacking, rioting and burning.

As dawn broke in republican Belfast black flags were hoisted in tribute to Sands.

Fr Des Wilson, priest and community worker, tells Forbes McFall about the potential impact of Bobby Sands death and assesses the mood of the community.

I would be very surprised if this doesn't mark the beginning of the end of English rule in Ireland.

When asked about a possible resolution he says

The English must get out. 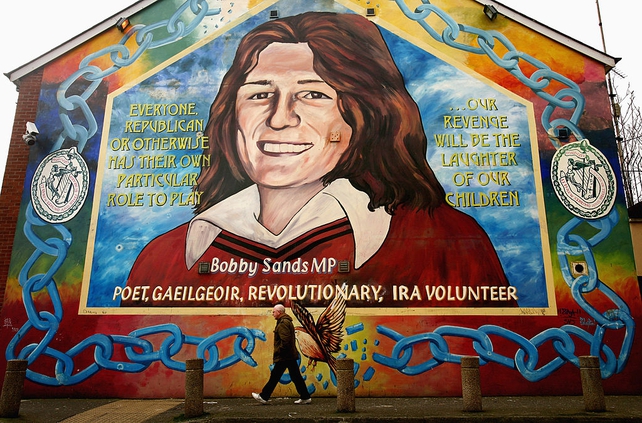 On the loyalist Shankill Road people give their reaction to the news of the death of Bobby Sands and their opinions on the five demands of the hunger strikers.

Paddy Devlin believes the five demands are reasonable and that they need to be granted if a resolution is to be found.

A 'Today Tonight' report broadcast on 5 May 1981. The reporter is by Forbes McFall.