Respects in Dublin following the death of writer Sean O'Casey at his home in Torquay in the south of England.

Sean O'Casey died following a heart attack on 18 September 1964. at the age of 84. Born in Dublin in 1880, O'Casey drew on his Dublin tenement roots for his writing.

Irish theatre critic, actor and theatre director Gabriel Fallon pays tribute to his friend Seán O'Casey from 422 North Circular Road in Dublin where he had lived for a number of years and where he had written a number of his works including 'Juno and the Paycock' (1924) and 'The Plough and the Stars', (1926). Both plays were first performed at the Abbey Theatre and remain popular today.

He had his bed here, his books here, and he always had, in winter and summer, a blazing fire.

Ernest Blythe Director of the Abbey Theatre pays tribute to the playwright and defends his character.

He liked argument and was a great user of the punted phrase.

Actress May Craig who had known O'Casey for over forty years and had acted in his plays, recalls Mrs Tancred's speech from 'The Plough and the Stars'.

Mother of God where were you when me darlin son was riddled with bullets? 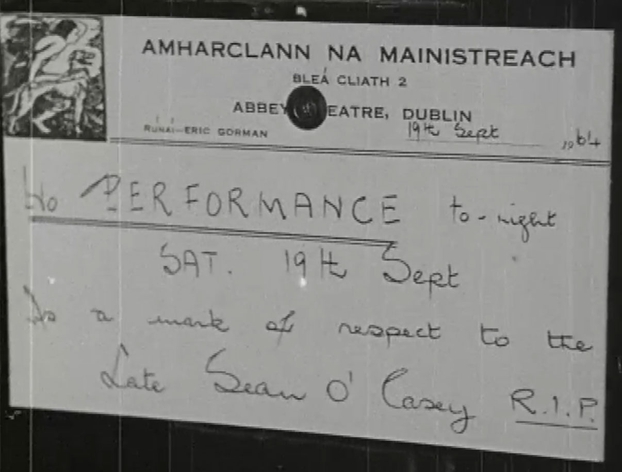