Brigid Laffan wrote an article many years ago for the journal Irish Political Studies which noted a characteristic attitude to our MEPs in its title: "While you're over there in Brussels, get us a grant". Local TDs are judged by many voters on their ability to do things for their area, and it would be surprising if MEPs were not often assessed in a similar way.

In Dáil elections, voters are also choosing a government and the national performance of parties is important. We can only understand some of the major reversals in party fortunes in recent years if we see voting in those terms. Our wider conceptions of democratic elections typically focus on parties and it is worth thinking about European elections in those terms.

One generalisation with some appeal is that European elections are occasions when voters can make their views known on the record of the government, with governing parties typically suffering a backlash in these "midterm" ballots. But we also see many voters picking the party they would pick in any other election, and in doing so they can be seen as giving their support to a general programme to be pursued by the party.

European elections are not about choosing government, but they are mechanisms to decide on the composition of a parliament that is more active across a range of areas than many national parliaments since it is not under the control of any government. Is there any connection between our European elections and the sort of policies those elected seek to pursue in the parliament? 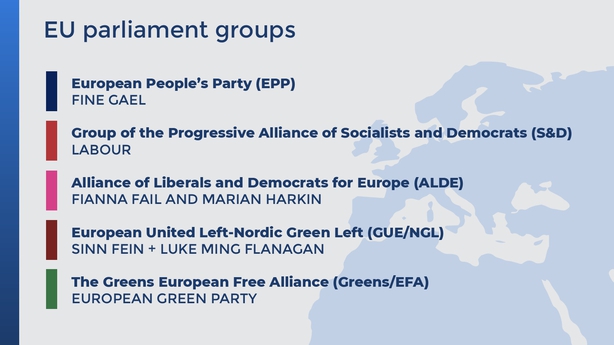 Once elected, MEPs choose to join one of the several groups that organise business within the assembly. Irish parties have been aligned with particular groups, most notably Fine Gael with the European People's Party (EPP), comprising largely parties in the Christian Democrat family across Europe. Labour has always belonged to the Socialist group (Progressive Alliance of Socialists and Democrats), representing Social Democratic Parties. Fianna Fáil has never been so settled but is now affiliated with the Liberal group, ALDE (Alliance of Liberals and Democrats). (The party's one MEP in 2014 decided to continue in the ECR group – European Conservatives and Reformists – to which Fianna Fáil had belonged previously.) Sinn Féin MEPs sit with the GUE/NGL (Confederal group of the European United Left – Nordic Green Left). Independents make their own choices. Marian Harkin was ALDE; Luke 'Ming' Flanagan in GUE/NGL. 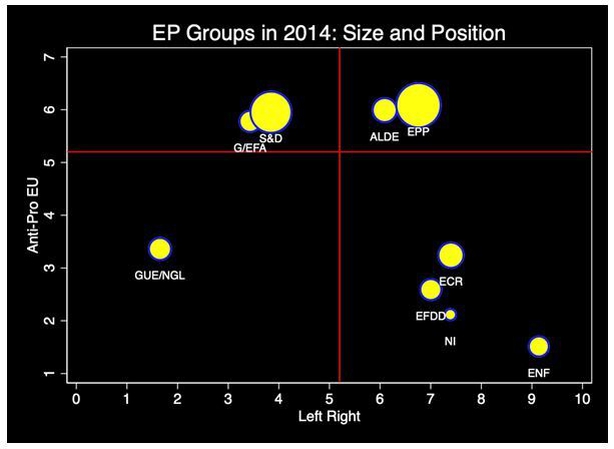 Figure One: Size and location of groups in the European Parliament 2014-19

Figure one shows the respective sizes of each group in the 2014 parliament, along with their location on a couple of important dimensions: an economic left right and a pro-anti EU dimension. A few MEPs are not aligned with any group (NI). The mean MEP location in the 2014 parliament on both dimensions is also shown, with the average MEP marginally right of centre and pro-European. (Judgements as to the location of national parties on these dimensions come from an extensive survey of experts conducted by Duke University in the US.)

The largest two groups in 2014-19 were both relatively pro-European and centrist, EPP centre right and S&D centre left. After 2019 it is expected that EPP and S&D will be significantly smaller, even if they will still be the largest two groups, with some growth of ALDE and a significant increase in the size of parties in the lower right hand side of the figure: right wing and anti-EU. New groupings are likely in that area: the European Alliance of People and Nations (EAPN), replacing ENF and Five Star Democracy, replacing EFDD. The weakening of the EPP and S&D will mean more reliance on the Greens and ALDE to maintain a strong pro-European direction in parliament's activities.

As Ireland has usually been seen as one of the countries most supportive of the EU, it is interesting that our MEPs have not obviously reflected that perceived support. In 2014, only 6/11 were affiliated to the one of the more pro-EU groups. Irish voters have also been perceived as strongly centre-right in their outlook but only 6/11 deputies were affiliated to parties on the right, and the relatively left-wing GUE claimed four Irish members. However, these perceptions are in line with the expectation that there will be no Irish MEPs in the growth area of the parliament, the anti EU populist right.

It is not possible to provide a picture of the Irish electorate that can be matched exactly to the picture of parties in Figure One. The latest Eurobarometer survey measuring public attitudes across the European Union found Irish people were very supportive of the EU. 92% thought their country had benefited from membership (compared to 68% across the union). That does not mean Irish voters are uncritical.

Several referendums here have demonstrated that support for the EU is far from being unlimited, and other survey questions demonstrate that even if Europe has been "good" for Ireland, it is not the case that everyone wants more decision-making at EU level. Different questions give us a different distribution of voters, but a widely-used measure is one asking people whether integration has gone too far, or not far enough, with options often offered on an 11-point scale.

Using this measure, the European Social Survey (ESS), a high quality biennial survey, has found Irish voters broadly in the middle, but with slightly fewer wanting more integration than did so before the crash. The most recent survey in 2017 showed 40% wanting less and 38% wanting more with 22% in the middle. However, only 20% wanted much less and 11% much more integration. This suggests little support for those groups in the EP described as anti-EU in Figure One, who want a lot less integration. The pro-EU groups do not necessarily want a lot more integration, although there will be many parties within those groups who do want more.

As far as the left-right dimension is concerned, Irish voters are centrist, with 40% located at the mid-point. 25% are on the left, largely centre-left and 35% on the right, largely centre right. A fair number of voters would support more left positions, but very few would locate themselves as right rather than centre right.

There has traditionally been very little connection between people's views on Europe and their left-right self-placement, and this remains the case. Most people (60%)  are centrist on both dimensions, if we define the centre as between points three and seven. There are just 3% on the strongly anti-European left, and 4% on the anti-EU right, and 2% on each of the other two extremes.

Many argue, of course, that left and right are somewhat outdated terms, and that they have little meaning within an Irish context. There is a connection between such positions and choices made in Irish elections – those who see themselves as left tend to vote for a party observers would see as being on the left – but little connection for the most part between such placements and voters' views on many issues. This may be down to the nature of party competition over the years.

A key issue underlying the rise of the right in Europe has been immigration, with parties in countries such as Italy, Austria, Hungary and the Czech Republic helping to make immigration a significant political issue, and benefiting from that in consequence. This issue is far less salient in Ireland and parties have done little to make it so. Peter Casey's performance may tell us more about its potential as an issue.

Looking at ESS data again, we can see that although there are people who think that immigration has been bad for the country, in terms of culture and the economy, they have not gravitated to any one party, and certainly not to a party on the right. At the 2016 election, those critical of immigration were slightly more likely to vote Sinn Féin, but differences across parties were not marked.

On the wider issue of Europe, the 2014 elections suggested attitudes to integration did not feature strongly. The B&A RTÉ Exit Poll asked people did they want more or less integration, giving response options of "in favour" or "against" rather than providing an 11-point scale. Voters divided almost equally between these two options, 53% to 47% in favour. (The absence of a mid-point probably forced people to choose one or the other, although there were a few "don't knows".)

While this does suggest a clear link between the views of voters and their parties, it remains to be seen whether views on Europe matter more in the European elections. In an earlier piece for RTÉ Online, I showed that there were many voters supporting a party in the Europeans but not the locals, and vice versa.

We can look again at the consistency of party support and this time contrast the European views of those who vote for a party in the Europeans, locals and in both. If "Europe" matters, it might be expected to matter more in the European than in the locals. Alternatively, we might expect that those attracted to a party only in those elections might be least likely to share common views and be more attracted by characteristics of the candidate. 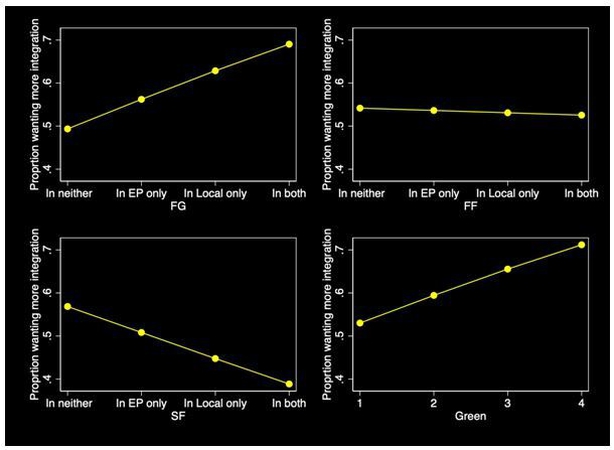 Figure Two: Attitudes to further integration and pattern of voting in 2014, by party

Figure Two shows the pattern for four parties: Fine Gael, Fianna Fáil, Sinn Féin and Greens. Supporters of Fine Gael across both elections are most in favour of integration and solid Sinn Féin voters least in favour. Those who supported Fine Gael only in the European election were less enthusiastic about further integration than those who supported them in both. The same is true of Green voters. In the case of Sinn Féin, those supporting the party only in the Europeans were less opposed to further integration than those voting Sinn Féin in both elections. Only in the case of Fianna Fáil is there no obvious upward or downward pattern.

Not all of these differences would be statistically strong, and outside any margin of error, but what is significant is that they point in the same direction. It is those more closely aligned to the party whose views most reflect those of the party, and such people are more likely to support the party in local than in European elections. This provides further evidence that the European elections are more influenced by big name candidates and less by party than are the local elections.