A long time ago in (what might seem like) a country far, far away, an RTÉ current affairs programme found the presenter on a hilltop with a local politician, who was able to identify all the households in view as Fianna Fáil, or (less commonly) Fine Gael.

Of course, our politics is notable internationally for the strong presence of independents both in and out of Government, and we now have many more parties represented at all levels of politics.

However, it is also apparent that 'party' itself seems to carry less weight with many voters than it once did.

We do still characterise elections in terms of party performance. This is fair enough but support won by parties is arguably very conditional, based on a candidate’s achievements or locality, or (perhaps less often) based on issues or concerns in a particular context.

In the 1970s, polls found most voters happy to identify with a party; in recent years, this figure is less than half of what it was then, and possibly lower again relative to what it might have been in the 1950s had polls been available.

We see this manifested in many ways. Vote transfers in general elections are increasingly less likely to stay within the party fold, and various waves of Irish National Election Studies (INES) using mock ballots find that large number of people who give a party their first preference do not give the same party their second, even when the party has other candidates on the ballot.

Perhaps more interestingly at the moment, we also see quite some variations in outcomes between elections held at the same time, as local and European Parliament elections have been since 1999.

On the face of it, in 2014, at least 9/100 voters did not support the same party in the locals as they did in the Europeans.

We know that because the results were different and, assuming vote numbers were effectively the same, it would require at least 9% of voters to behave differently to account for the different outcomes.

Much the same figure can be calculated for the 2009 elections, but the two sets of results in 2004 and 1999 were more similar, requiring just 6% and 3% to cast different preferences in those elections.

However, we know that this picture of volatility, sometimes called aggregate volatility, can be a huge underestimation of what happens at the level of individuals: that is, the number of people who actually voted in a different way in one election to the way they voted in the other.

We know this through surveys, and in the case of the 2014 elections we have an RTÉ exit poll conducted by Behaviour and Attitudes which asked over 3,500 people to fill in a mock ballot corresponding to the one they would have filled in for the European elections and which also asked them how they voted in their local election (The figures in the exit poll are pretty close to the results, although there are small differences which affect the figures in the analysis below, but only marginally.)

The evidence from this extensive survey is that the percentage of voters behaving differently across the two sets of elections was not 9%, but 38%, more than four times the figure apparent from the aggregate results.

The parties performed similarly in each (see Table 1) with the biggest differences in the Sinn Féin vote (five-point difference) and independents (three points). But each party in fact attracted more voters; it is just that some of that the support was confined to just one of the two elections.

So, Fine Gael drew a vote from 31%, far ahead of the figure won in either election and Fianna Fáil similarly won the support of 30% (probably a little more because its local vote was two points too low in the sample), while Sinn Féin won just 21%, slightly more than its European support (but that was underestimated in the sample by three points). 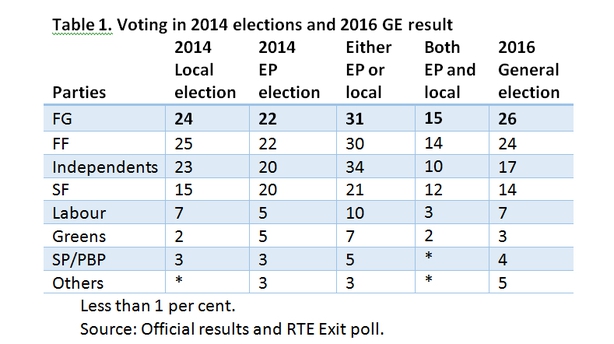 Most striking is the figure for independents, suggesting that 34% cast a first preference for such a candidate in one or other of the two elections (This result was echoed in an INES survey in 2016 which found voters more inclined to support independents than any of the parties.)

Among the smaller parties, Labour won support from 10% of voters, Greens, 7% and the Socialist Party/PBP won the votes of 5%.

What these figures show is the fragility in the support on which parties draw. Some potential voters are dependable, but significant numbers are not. Parties' success at mobilising this support will vary across time.

Various waves of INES (see below) have allowed researchers to explore this systematically, showing how big is the overlap in the potential support bases of different parties. These analyses have shown quite clearly that Fine Gael and Fianna Fáil do not fish in different pools, and that most parties do share some of their potential support with several other parties.

Looking on from the 2014 elections the BA/RTÉ exit poll also asked people how they would vote if there was a general election.

Of course, this did not actually take place for another two years, but it does allow us to see how these different groups of voters translated their local and/or European support into support in a Dáil election.

Some 12% of voters were uncertain; the analysis here is confined to those who did give a preference.

Figure 1 shows the overall pattern, how closely support in Europeans, locals and both (and neither) corresponded to an intention to support a party in the next general election. 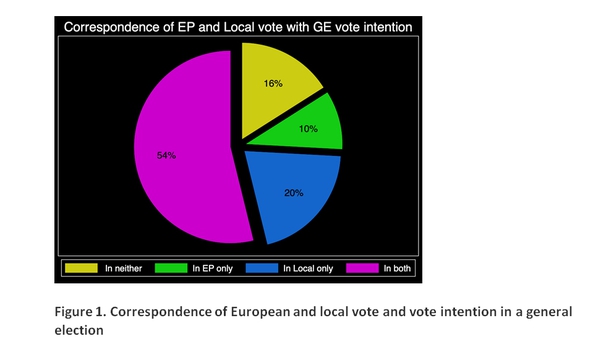 The most striking part of this figure may be the 54% who plumped for the same party in all three, but this is only a little over half of all voters.

Perhaps equally remarkable is the figure of 16% for those who say they will vote for a party they gave no support to in the 2014 elections.

When people did support a party at either the locals or the Europeans, but not both, the local vote seems to have been a better indicator of future general elections support.

There is no comparable data from previous sets of elections so there is no knowing for certain how far 2014 was exceptional, but there is also no reason to think that 2014 was very different to 2009 at least, and good reasons to expect that 2019, and its relationship to our next general election may not be so different. 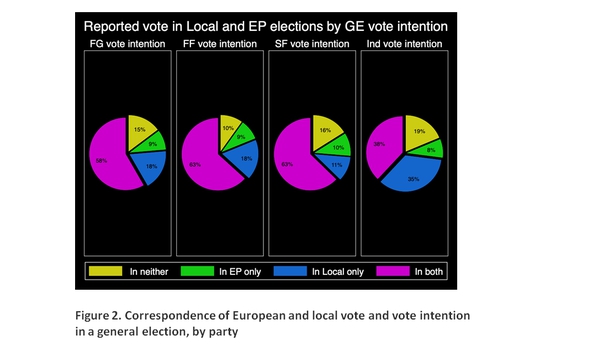 Fine Gael, Fianna Fáil and Sinn Féin all show similar patterns, although Fianna Fáil did best at mobilising likely supporters in the 2014 elections: only 10% of future support comes from those who did not go with Fianna Fáil in 2014, compared with 16% for both Fine Gael and Sinn Féin.

For all parties, the support won in the local elections would seem to translate better into future Dáil support than votes won in the Europeans. 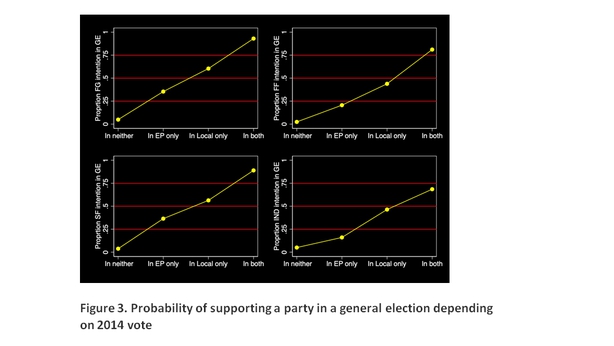 For each of the main three parties and for independents, support in the locals (alone) translates more effectively into general election support than support in the Europeans (alone).

For Fine Gael, the probability of someone who did not support it at all in 2014 saying they will vote for it at the next election is only .05, rising to over .35 with a European vote, .60 with a local vote and .93 with both.

In betting odds terms, this takes us from a rank outsider to an odds on (near) certainty. The pictures for Fianna Fáil and Sinn Féin are similar (although the Fianna Fáil line is flatter: voting local and European for Fianna Fáil gives only a .81 probability of a general election vote).

More exceptional is the picture for independents, with even less predictability given by European behaviour and combined local and European support giving a probability of voting independent next time of no more than .69.

Perhaps this is understandable: voters may need to see who is running. And this underlines the difficulty for pollsters of measuring independent support away from a campaign.

More generally perhaps, the very nature of 'support' for parties goes some way to help us understand the variation we see in opinion polls.