The people have spoken, but as yet only Ipsos MRBI has listened to them, and only to a sample. We are only too aware of how we can be misled sometimes by exit polls, but the big picture this poll gives is the best we have to go on at the moment. 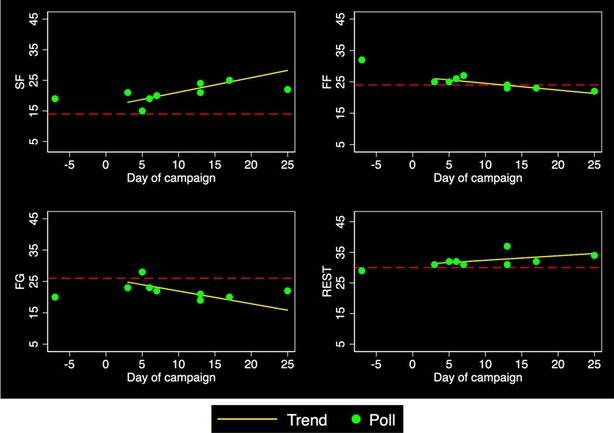 We can see from the last points on day 25 relative to the trend in the polls earlier that Sinn Féin fell away in the last week while Fine Gael rallied, leaving all three with much the same level of support.

When it comes to Sunday, and to deciding the make-up of the 33rd Dáil, it is the local distributions of first and lower preferences that are decisive, but normally the national level figures for party support give us a pretty good indication of the next Dáil.

I have looked at the relationship between national shares of the vote and seats won in the Dáil since 1981, and it is a very strong one, as it should be in any system of PR.

The graph below shows this pattern using a yellow line. A strictly proportional relationship is shown by the blue line. Most parties are most of the time close to the line.

There are some other factors to consider. The most important is the number of candidates nominated: a small vote share is more likely to win seats when it is spread over fewer candidates. The predictions below make allowance for that. The typical error in predictions made in this way is fewer than five seats across all parties. 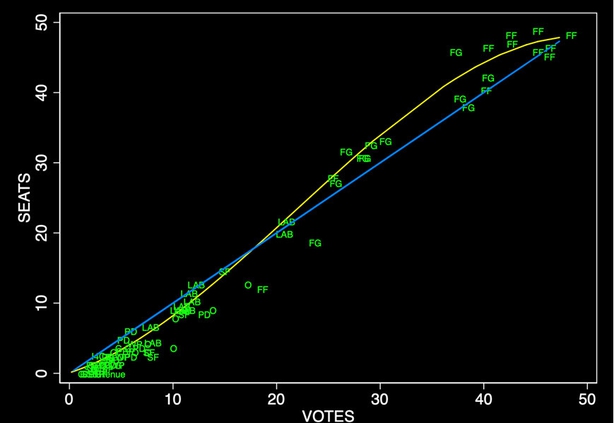 But there are some instances when the errors are bigger. Fine Gael in 2002 and Fianna Fail in 2011 each fell 10 seats short of expectations. In each case those parties thought they would do much better, and nominated too many candidates, in 2011 because Fianna Fáil had a lot of sitting TDs. Fianna Fáil also was much less transfer friendly in that year.

In 2020 Fine Gael may lose out because it was overly optimistic: it planned its campaign expecting a larger vote. Parties may also suffer from overly pessimistic expectations.

This is true of Sinn Féin, who began this campaign hoping to maintain its position, having experienced big losses in the elections last summer. Nominating just 42 candidates assumed a vote somewhere in the teens, and the party nominated two candidates in just a handful of places, so it cannot reach the levels that would normally be expected from the support suggested in the exit poll.

Who will benefit from this remains to be seen, but given that the party will have surplus votes where it has done well, it is likely to be those still in the hunt after several counts, and these will be the larger parties.

There are two sets of predictions below. The first is what we would expect, given all parties nominated enough candidates, although setting a limit of 42 on Sinn Féin.

The second puts an upper limit of x on Sinn Féin and redistributes those seats it might have won to all other in proportion to size. The upper limit is at this point a guess, informed by exploring the likely strength of the party across constituencies in the light of the exit poll. A better guess can be made once the tallies are known.

This leaves party leaders with a lot of work to do. The voters have spoken: those in the Dáil must make what they can out of it.