A new exit poll suggests that Fine Gael, Fianna Fáil and Sinn Féin are tied when it comes to first preference votes, making the result of the General Election too close to call.

The exit poll, carried out by Ipsos MRBI for RTÉ, The Irish Times, TG4 and UCD, indicates all three parties have 22% of first preference votes. 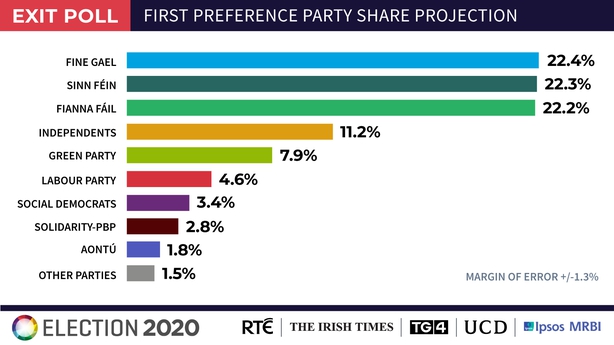 The exit poll is based on 5,376 completed interviews conducted immediately after people voted at 250 polling stations in 39 constituencies across the country.

It indicates Green Party first preference support stands at 8%; Labour at 4%; the Social Democrats at 3%; Solidarity People Before Profit at 3%; and Independents at 11%.

The first preference vote of both Fine Gael and Fianna Fáil is suggested by this poll to stand at 44% - significantly lower than the 49% they polled in the 2016 General Election.

In previous exit polls, support for Fianna Fáil has been under-stated. However, on this occasion, the number of people interviewed has increased from about 3,000 to more than 5,300 to improve accuracy.

The poll suggests a move toward Sinn Féin among younger voters, with the party receiving the largest number of first preference votes among 18-24 years olds. 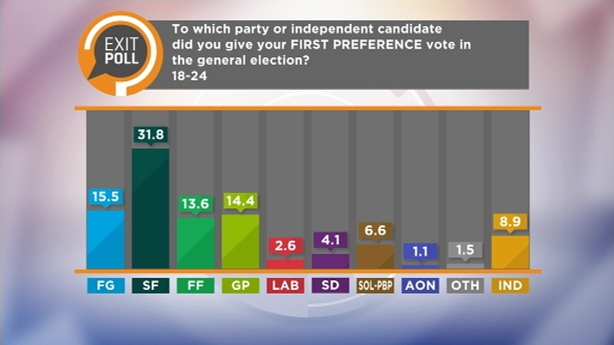 The poll suggests a polar opposite voting pattern between older and younger voters. It indicates that the majority of voters over the age of 65 gave their first preference to Fine Gael or Fianna Fáil. 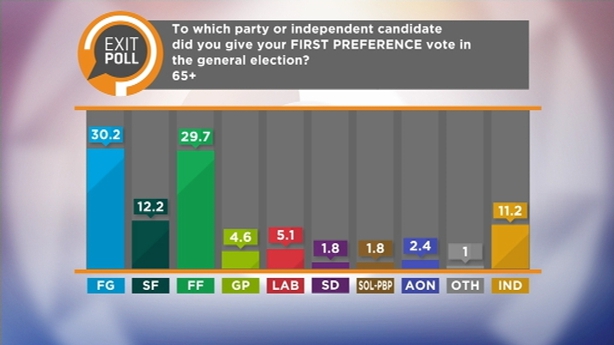 Meanwhile, the exit poll indicates a possible weakness in support for Fianna Fáil in the Dublin Region in comparison to the rest of the country.

It suggests that the party has 14% of the first preference vote in the capital, compared to 21% for Fine Gael, 22% for Sinn Fein and 6% for Independents.

The regional breakdown of the exit poll suggests support for the Green Party is strongest in Dublin where it has 13% of the first preference vote, while its support is considerably weaker outside the capital.

In Connacht Ulster the poll suggests support for Fianna Fáil is 22%, Fine Gael is 22%, Sinn Fein 26% and Independents 17%.