There have been a lot of false dawns for those hoping for politics in Ireland move away from its civil war based structure to a left right pattern of competition along typical European lines.

The seventies were supposed to be socialist but that did not transpire. The left vote did not exceed even 15%.

The Spring tide saw a left vote rise to almost 25% in 1992 in the wake of Mary Robinson's successful presidential campaign, but in 1997 it was only 1%.

The Gilmore gale in 2011 was another false dawn: the left vote was almost 35% in 2011 but again it was not possible to build on this as the vote dropped back slightly in 2016.

In 2020 the left vote rose to unprecedented heights.

Defining the left as including Sinn Féin, Solidarity/PBP, Social Democrats, Labour and Greens gives a figure of 42%.

Arguably this might be augmented by a few independents, but this would not add much.

How far everyone in this grouping might agree with my classification is another matter, but I think most observers outside the country would agree with my grouping, although whether the Greens are really a left movement is widely debated.

Voters who were voting left and transferring left seem to have done so more between SF and Solidarity/PBP than between either of these and Labour.

Academic analyses has found that voters for all these parties tend to identify themselves as 'left, although that is not to say that their policy preferences accord with what we might expect of someone on the left: they certainly often favour tax cuts over spending on social services, and are wary of state intervention in economic affairs.

Without doubt, the crash and its aftermath were critical in undermining support for the traditional parties, but the new configuration is fundamentally different. In the past, surges in left support were halted by the need for Labour to serve as the minor partner in a Fine Gael or Fianna Fáil government. This is not the case this time, although it remains to be seen how government is formed.

This now near equality of left and right in national terms is far from being the case across the country.

The graph below shows the left vote constituency by constituency. This shows that the left is in the majority over all other parties and independents in many places, but these are largely in Dublin.

Only in Dublin Rathdown did the left not exceed 50%.

Yet outside Dublin, Kildare North and Wicklow – all in the Dublin hinterland, we see a left majority just in Louth and Waterford. By and large the left are much stronger in Dublin than elsewhere. 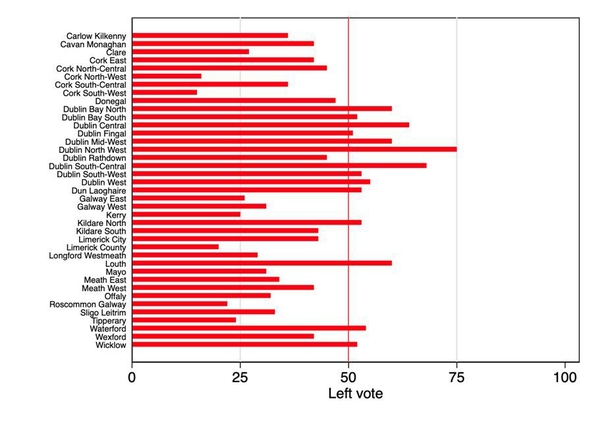 Leaving aside these independents and others not defined as left, we can compare the strength of the left with that of the traditional parties across constituencies. Who wins where? 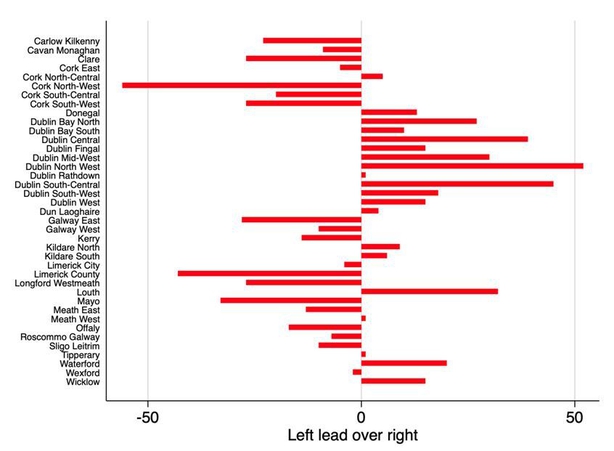 The left wins out in Dublin, often by a huge margin. So it does in Wicklow and Waterford, both Kildare constituencies, and Donegal, but generally outside the east of the country, the traditional parties are still large, if by small margins in some areas. The left leads in half of constituencies.

This is hardly a surprise. Left parties have traditionally performed best in urban areas, and worst in rural ones in other countries, although Labour's seats once were as likely to be won outside as inside Dublin.

This time the left have mobilised very effectively to win seats in some of the most rural areas, such as Cork SW, while SF has brought unprecedented success for any left party in areas like Donegal.

Where do we go from here? One feature of the left is its fragmentation, with half a dozen different elements: will Labour and Social Democrats merge at some point, and will the fissiparous far left simplify its identity?

More important though is whether they can all fight another election united against a common enemy, particularly one which has been responsible for government policy.