Along with many other things inherited from Britain, we have been used to seeing government in terms of a majority, often comprised of one, but occasionally two, or more parties.

Irish voters by the turn of the century were less enthusiastic about single-party government.

From the point in 1989 that Charlie Haughey decided that holding onto his leadership of the party was more important than sticking to his party's principal of opposition to coalition, multi-party government has become the norm.

Michael McDowell’s PD poster "One party government: no thanks!" in 2002 may not have been decisive in giving his party the opportunity to take part in the 2002-07 governmenFt, but it did give voice to the views of most voters, including a substantial number of those voting for Fianna Fáil.

After the last election things got more difficult. The party system had fragmented, and the considerable growth in independent TDs meant that even putting together a majority coalition was a far from simple matter. Indeed, it proved impossible.

The simple option of a coalition between Fianna Fáil and Fine Gael was rejected by Fianna Fáil. Instead we had a minority Fine Gael led coalition with Independents, made possible by a confidence and supply arrangement with Fianna Fáil.

This took some time to establish, and was in doubt up to the last minute, as Fine Gael deputies played for time in the Dáil waiting for Enda Kenny and the Independents who would support him to come into the Dáil for the vote.

This happened on 6 May, almost two months after meeting of the 32nd Dáil on 10 March (the election was on February 28).

The initial arrangement was to last until late 2018, but it ran more than one year longer, in part because of Brexit.

Elsewhere in Europe, and outside it, minority governments are common: almost 35% of democratic administrations fall into this category and they are the norm in countries such as Denmark, New Zealand (since 1996), Norway, Romania and Sweden, and common in Canada.

Those in New Zealand and Sweden have attracted most attention. Minority governments are also far from being unusual in Ireland, but those as we have seen in the more recent past (in 1981, 1982 and 1987) involved a party or parties in office who were very close to commanding a majority.

That in 1987 was unusual because Fine Gael under Alan Dukes agreed to support the economic reforms introduced by the Fianna Fáil government in what it saw as the national interest but from outside: this was the Tallaght Strategy (for which Fine Gael got little thanks from the electorate).

It was essentially decision made by Fine Gael: there was no arrangement between the parties let alone a formal agreement. In 2016 there was an agreement, but it took several weeks to formalise.

Promises were given on both sides, with Fianna Fáil committing to abstain on votes of confidence and facilitate budgets consistent with agreed principles. Fine Gael on its part accepted Fine Fáil as an independent opposition party, and agreed to allow Fianna Fáil and other parties more leeway than hitherto to progress legislation, while all agreements with independents would be published.

Elsewhere minority governments typically survive either on something like this sort of deal, or, more precariously perhaps, on separate issue by issue arrangements.

Some agreements are more detailed than others, and some involve, if not cabinet office, then representation in central administration.

There are also, typically, arrangement to maintain communications, and to resolve problems.

A further feature of post-election negotiations in Ireland is that they are something of a free for all. Elsewhere, heads of state often appoint someone whose job it is either to form a government, or to hold discussions across parties and facilitate, and encourage a viable government.

All things are possible so far with Sinn Féin seemingly the key player as the party who "won" the election.  This is a very British view perhaps, where the biggest is always the winner regardless of size. Elsewhere it might be thought there were no winners, although several parties did have successful elections.

Sinn Féin did win more votes than anyone else, and arguably best represents opposition to the government led by Fine Gael, and supported by Fianna Fáil, whose elements lost votes.

One option then is for Mary Lou McDonald to construct a coalition to support her for Taoiseach. This is not going to command a Dáil majority.

Could there be a left alliance? Sinn Féin, Greens, Social Democrats and perhaps Solidarity have 60 seats, and there would have a lot of work done to increase that significantly.

Labour might be added, but that seems very unlikely.

There would need to be a lot of phone calls, and lengthy meetings to come up with a programme for government, but one cannot rule that out.

Some Independents might commit their support in exchange for policy promises without necessarily being part of any government, but there is still a long way to go to get from 60 seats to the 80 required.

If Sinn Féin could construct a formal alliance that fell short of a majority, it would then be up to Fine Gael and Fianna Fáil to decide whether to abstain on the vote for Taoiseach, and subsequent confidence votes, at least for a given period.

Neither seems inclined to do that at present, but it remains a hypothetical possibility, particularly if such a coalition could come close to 80 seats.

Fine Gael and Fianna Fáil together command only 73 seats, so their opposition alone would not be sufficient to prevent the formation of a minority Sinn Féin led government, although were Labour also to oppose, adding six more seats, this surely would be critical.

The fears that this might propel Sinn Féin into office almost by itself at the next election seem likely to ensure this is a non-runner, although it would be the easiest way to a programme for government. Talk of adding the Greens to this would complicate matters, and would certainly be a risky option for the Green Party.  A third option is for the largest party, Fianna Fáil, to try to build a coalition.

This might resemble many of those elsewhere because, arguably, it would have parties outside government both to the right, and left. It would have to include the Greens and Labour, but that combination would have just 56 seats. Even if a confidence and supply arrangement, another Tallaght Strategy, could be agreed, this alliance would have too few seats enough to win a vote against all others. That would require another six seats, at least. Is that possible?

Many rural Independents, not least those from Kerry, would be uncomfortable with the Greens, but there is a deep and varied pool of Independents so it is not impossible. Again, putting together something along these lines will require more than a little time, and – as we have seen over the last while – a tight majority can erode very quickly. It could involve a lot of work to construct something with a very limited lifespan.

A fourth option would be a Fianna Fáil/Sinn Féin government. Again, with just 75 seats this would need some additional support to obtain a majority but that would be easy enough if the initial alliance was secured.

Neither party seems at all keen on this but stranger things have happened. Finally, the option of a national government has been advanced by some. This would include at least the largest three parties to come together for a limited period with a very clear, but limited, policy agenda.

Perhaps this could get us through Brexit, although it appears that this is not something that troubles voters.

Another election a year or so down the line might provide an outcome which makes government formation easier. 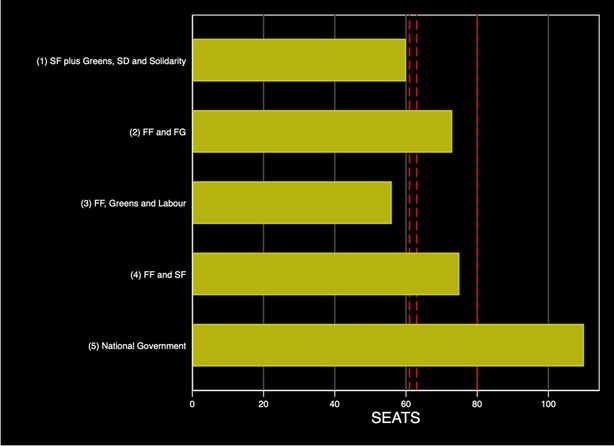 The graph above summarises these options, showing the seats in each alliance, the required mark of 80 seats, and the lower level of support that would be required if either Fine Gael or Fianna Fáil were to abstain.

Only the national government exceeds the 80-seat threshold; options (2) and (4) exceed a threshold if a major party abstains, while options (1) and option (3) do not reach that lower threshold.

Support from Independents could strengthen any of these. Independents have been critical to minority governments in the past.

At present, it is the first option making most headway, not least because it has not been ruled out by those parties in advance of the election.

This effort will have to run its course before serious consideration is given to other options. At the least, other options would require some leaders to reconsider positions adopted before the election.

Leaders might themselves step down, as one has done already, but this will have no impact on the arithmetic.

All parties will consider the consequence of a failure to agree: another election.

In such an eventuality, the numbers might be different, although last time one election followed closely on another, between 1981 and early 1982 the second set of results was similar to the first.

It took another election late in 1982 to establish a government that would last. Even so, on that occasion, only a small change was needed to produce a stable majority coalition.

This time, if it was to come to that, a rather bigger upset would be needed.