The problem Boris Johnson faces over the Dominic Cummings affair right now is a problem of perception. Is there one set of rules for the ruling elite, and another for everyone else?

Can known carriers of the virus make an 800km round trip (and possibly a 100km trip to a tourist spot as well), and get away with it because they are friends of the prime minster?

So far Mr Johnson has made a case for his chief adviser on fairly narrow legal grounds; Dominic Cummings did not break the law as it was then in force, nor did he breach the guidelines that were then in force, and used common sense in making his decision, as the government says it wants people to do.

This may well be the case - though so far the only person who appears to have been given a full account of what Mr Cummings did was Mr Johnson. Nevertheless, the problem of perception remains and so do a lot of unanswered questions, notably a reworking of the old Watergate question: What did the prime minster know, and when did he know it?

Dominic Cummings, of all people, should recognise the political importance of perception over facts or legality.

Mr Johnson has exposed himself to considerable political risk. By going so far out on a limb to protect his chief adviser, he has left himself vulnerable. If there are more revelations about Mr Cummings, they will now directly stick to the prime minister who has placed his reputation, political judgement and political capital at hazard for his adviser.

Could there be more? In this age of camera phones and CCTV, video or photographs could prove damaging if any were to emerge and contradict the prime minster's account.

A retired Chemistry teacher in Barnard Castle, and a Liberal Democrat councillor in Durham have made formal complaints to Durham Police about Mr Cummings' trip, or indeed trips. This could yet lead to a police investigation, and the, I think remote, possibility of charges. But still, there is a risk there.

The outrage of traditionally anti-Tory newspapers, or the stunts of activists like Led by Donkeys, who parked an advertising van outside Mr Cummings' house yesterday afternoon to show videos of government information films, including the prime minster saying "you must stay at home," will not cut through to the general public beyond those who dislike Mr Johnson, Mr Cummings and the Tories.

The hostility of the pro-Tory press, notably The Daily Mail, now likely to have overtaken The Sun as the country's best selling newspaper, may help to unnerve Tory MPs however. The headline: 'What planet are they on?', above a page one editorial demanding Mr Cummings go, "no ifs, no buts".

The Daily Telegraph, Boris Johnson's former employer, has not held back in its attack on the exoneration of Mr Cummings. While The Spectator, the very pro-Tory magazine Mr Johnson used to edit, was the first to publish a thundering article demanding Mr Cummings must go. Mary Wakefield, Mr Cummings' wife, is a senior editor at The Spectator - even that couldn’t stop the outrage.

The Spectator may also be stung by the publication of an account of the Cummings' family’s time in lockdown by Ms Wakefield that it published in late April, an account that omitted the fact that their isolation took place in Durham.

But what is really getting to the MPs that make up that big Tory majority in the House of Commons is the emails, texts, WhatsApp messages and phone calls from constituents expressing their rage, and more powerfully, their pain.

The multiple accounts of people who missed funerals or other family events because of the lockdown, or who watched loved ones die on a mobile phone video link, only to see what they perceive as special treatment for a friend of the prime minister is a powerful force.

Mr Cummings' family was not immune from that pain either. During his confinement in Durham, Mr Cummings' uncle, retired high court judge Sir John Laws, died from Covid-19 in London. Sir John’s sister, Dominic Cummings' mother, had to stay in Durham. 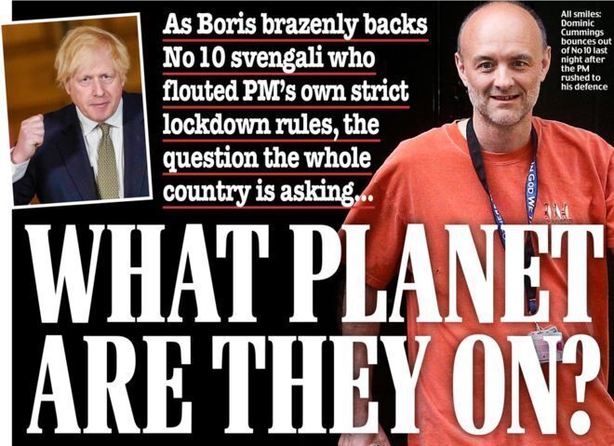 But Dominic Cummings thrives on outrage. He is also a leading practitioner of data driven politics, of using big data analysis to shape and drive policy change. So he will, no doubt, have looked at the numbers in making his own calculation of whether to stay or go - if his continued presence in Downing Street helps or hinders the project of government he, Boris Johnson, and Michael Gove, have embarked on.

That analysis may be showing that there is a way through this for the triumvirate - even if it comes at the cost of some loss of support in the country. And if some backbenchers call for Mr Cummings to go, then so what if an 80-seat majority becomes a 60-seat majority?

The number crunching, the legal defence, and the repeated mention of childcare needs are the armour Mr Johnson and Mr Cummings will wear to tough this one out. In the short term they may well get through it.

Things could get a lot trickier if people like Professor Stephen Richer are correct. He is a member of SPI-B, a group of behavioural scientists who advise the government, via the SAGE group that Mr Cummings attends, on how to communicate with the public on public health for maximum effect during this pandemic.

The professor has been on TV and social media, expressing his fears that the perception issue will lead to a loss of trust in the government's messaging. This in turn could lead to more people flouting the guidance, increasing infections and possibly leading to a second spike in the disease. Preventing that "is something we all have a stake in, as many more people will die," Professor Richer told the BBC this morning.

A second spike is a risk for all governments battling this virus. So far there is little sign of one in the countries in Europe that have been to the fore in easing their lockdowns. That may also encourage Mr Johnson to stick by Mr Cummings - it's a gamble he thinks is worth making.

Indeed this affair illustrates just how important to the prime minster Mr Cummings is.

Ordinarily when advisers become the story, it's time for them to go. They are supposed to be the back room people, hardly known to the public, not seen, not heard. They don’t have to win popularity contests, but their political masters do.

Mr Cummings has long been a story. Right now he is THE story. But the prime minster has ruled that it is not time for him to go.

So much has been overturned by this coronavirus crisis, should we be that surprised that conventional political wisdom is another?