British Prime Minister Boris Johnson's senior aide Dominic Cummings has said "I don't regret what I did", as he responded to allegations he breached coronavirus lockdown restrictions.

Mr Cummings drove over 400km from London to Durham in March to self-isolate with his family - apparently because he feared that he and his wife would be left unable to care for their son if they fell ill. Official guidelines warned against long-distance journeys.

Mr Cummings said his decision to travel from London to Durham was based not only on fears over a lack of childcare if he became incapacitated with Covid-19 but also over concerns about his family's safety.

Dominic Cummings has said 'I don't regret what I did', as he responded to allegations he breached coronavirus lockdown restrictionshttps://t.co/TByNz5LNuY

At an extraordinary press conference in Downing Street's rose garden today, Mr Cummings said: "I don't regret what I did. I think reasonable people may well disagree about how I thought about what to do in the circumstances, but I think what I did was actually reasonable in these circumstances.

"The rules made clear that if you are dealing with small children that can be exceptional circumstances.

"And I think that the situation that I was in was exceptional circumstances and the way that I dealt with it was the least risk to everybody concerned if my wife and I had both been unable to look after our four-year-old."

Mr Cummings said he was worried that "this situation would get worse".

"I was worried about the possibility of leaving my wife and child at home all day and often into the night while I worked in Number 10," he said.

"I thought the best thing to do in all the circumstances was to drive to an isolated cottage on my father's farm."

He said the next day he woke up in pain and "clearly had Covid symptoms".

"I believe that in all circumstances I behaved reasonably and legally," UK PM's chief adviser Dominic Cummings says following controversy around a 400km trip while Covid-19 restrictions on travel were in place | More: https://t.co/PpQXF4mFq4 pic.twitter.com/CRigw2cuDV

Setting out the details of his actions, Mr Cummings said the Prime Minister had asked him to publicly give his account and he acknowledged he should have spoken earlier.

"I know that millions of people in this country have been suffering, thousands have died, many are angry about what they have seen in the media about my actions," he said.

"I want to clear up the confusions and misunderstandings where I can.

"In retrospect, I should have made this statement earlier."

Mr Cummings denied he had broken the "spirit" of the rules and said he had not offered his resignation to the Prime Minister.

He said: "No, I have not offered to resign. I have not considered it.

"I think it's reasonable to say that other people would have behaved differently, in different ways, in this whole situation.

"But as I stress I was trying to balance lots of competing things."

He said he could not have remained in an isolated cottage for weeks afterwards because he was involved in vital work in Downing Street.

"I thought that if I could return to work then I should seek to return to work", he said, and took "expert medical advice" before doing so.

Further reports also suggested he took a second trip to the North East of the UK in April, having already returned to London following his recovery from Covid-19 - a disease which has seen more than 45,000 people in the UK die after contracting it.

Speaking at the daily Downing Street press conference afterwards, Mr Johnson said: "Do I regret what has happened? Yes, of course I do regret the confusion and the anger and the pain that people feel."

He said: "This is a country that has been going through the most tremendous difficulties and suffering in the course of the last 10 weeks and that's why I really did want people to understand exactly what had happened."

When asked if he was prepared to revisit his decision to support Mr Cummings, he said: "I cannot give unconditional backing to anybody, but I do not believe anybody in Number 10 has done anything to undermine our messaging."

Mr Cummings said he had to drive for half an hour on Easter Sunday to test his eyesight before making the long trip back to London from Durham.

Mr Johnson was asked why the government had not laid on a car for Mr Cummings to return to the capital.

Mr Johnson said: "To the best of my knowledge, Mr Cummings has just subjected himself to your interrogation for quite a long time now about these very detailed matters and has produced quite a substantial chunk of autobiography about what happened in the period from 27 March to 14 April.

"I really feel that it would be wrong of me to try to comment further. I think people will have to make their minds up. I think he spoke at great length. To me, he came across as somebody who cared very much about his family and who was doing the best for his family. 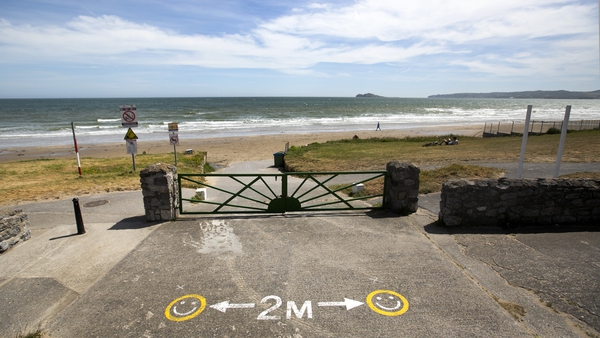 As it happened: No new virus deaths in Ireland