The lack of a host did not scupper this year's Academy Awards, which had plenty of memorable moments on the night.

It was a night of unexpected wins which threw up some shocks, but also celebrated diversity.

We've rounded up some of the best moments at this year's Oscars ceremony below.

Captain America himself Chris Evans sprung into action after Regina King won the Best Supporting Actress Oscar (for her superb performance in If Beale Street Could Talk) and escorted her to the stage.

CHRIS EVANS HELPING REGINA KING UP IS THE BEST THING EVER, WHAT A GENTLEMAN #OSCARS pic.twitter.com/uzA8qbqNWy

His chivalry did not go unnoticed.

Jamie Lee Curtis praised him by tweeting: "Hey @ChrisEvans you are a gentleman! #raisedwell."

Hey @ChrisEvans you are a gentleman! #raisedwell

Well this is pure class. After losing out to Regina King in the Supporting Actress category, Vice star Amy Adams got out of her seat to congratulate King's mother, giving her a hug and holding her hands. Just lovely.

This is very cool: Amy Adams got out of her seat to go over and congratulate Regina King’s mother with a hug after she lost to Regina for best supporting actress. They shared a moment and held hands #Oscars pic.twitter.com/n6COXmYwvu

Adding a welcome dose of levity to the proceedings, Melissa McCarthy and Brian Tyree Henry went method as they took to the stage to announce the Costume Design winner in full regalia of their own, replete with scattered stuffed bunnies.

Sidenote: Twitter has decided Melissa McCarthy should host next year's ceremony and we think you'd be hard pushed to find a better candidate.

Melissa McCarthy and Brian Tyree Henry announce the award for Best Costume Design in some costumes of their own. #Oscars https://t.co/zSrvQG8ZE6 pic.twitter.com/SPkT92WlSw

Wayne and Garth make a cameo

This made us very nostalgic. Mike Meyers and Dana Carvey rightly received a rousing welcome when they took to the stage as their beloved Wayne's World characters. We'll have to rewatch that movie ASAP.

Wayne and Garth make a cameo on the #oscars stage to introduce #BohemianRhapsody https://t.co/ufMFarwc3p pic.twitter.com/cxCIslR6OB

Spike Lee delivers the speech of the night

Spike Lee is finally an Oscar winner! When it was announced the BlackKklansman director had won the prize for Adapted Screenplay, he was so excited he leapt into Samuel L Jackson's arms. We wish all Oscar winners showed that level of unbridled joy.

And, of course, he went on to deliver a rousing speech.

He opened it by joking: "Do not turn that motherf****** clock on", then said: "We all connect with the ancestors who have love, wisdom and humanity. 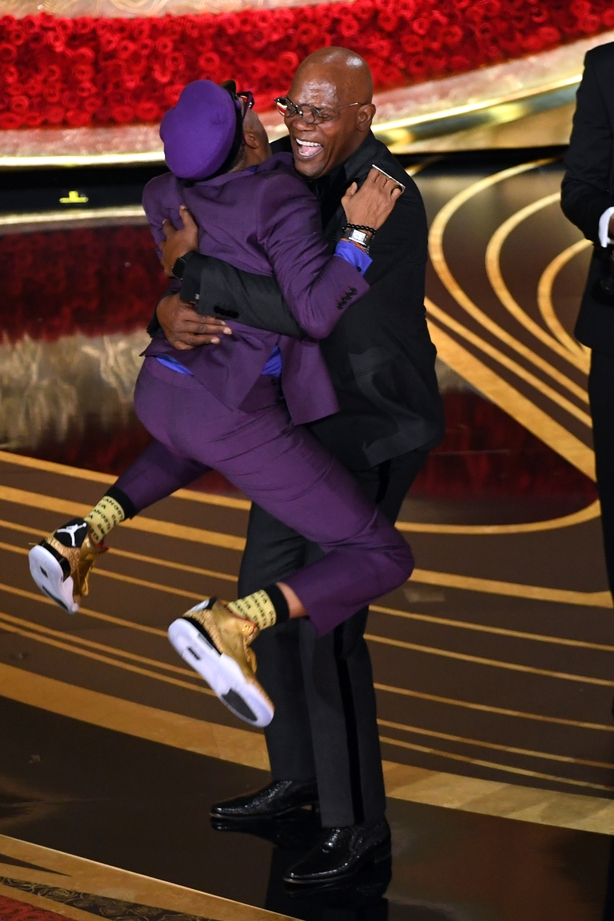 "The 2020 presidential election is around the corner, let's all mobilise, let's all be on the right side of history, make the moral choice between love versus hate."

Lady Gaga and Bradley Cooper get romantic as they perform Shallow

Lady Gaga and Bradley Cooper got a double-standing ovation for their performance of Best Original Song winner Shallow from A Star Is Born.

The very earnest and intimate performance saw them channelling their characters Ally and Jackson by staring into each other's eyes.

It was either very cute or very cringe, depending on your perspective.

Lady Gaga and Bradley Cooper received a double-standing ovation for their performance of "Shallow" during the #Oscars https://t.co/1PGy3Ci1EY pic.twitter.com/MFY4UdrFlD

Cute! Rami Malek gave his partner and Bohemian Rhapsody co-star Lucy Boynton a long kiss after being announced as Best Actor. He began his speech in a self-deprecating manner, saying: "I may not have been the obvious choice but I guess it worked out."

The actor went on to thank Boynton, adding: "Lucy you are the heart of this film.

"You are beyond immensely talented, you have captured my heart, thank you so much". 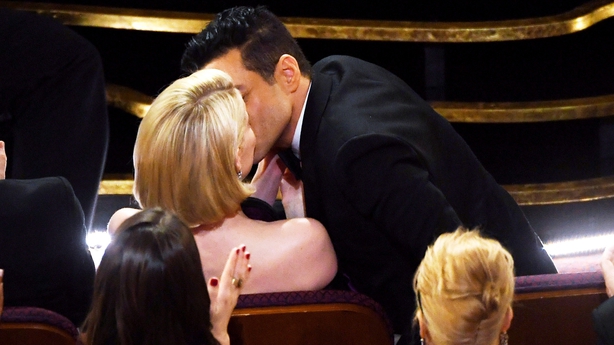 Olivia Colman's speech after her unexpected Best Actress win for The Favourite ahead of the widely-tipped Glenn Close was so real and heartfelt and emotional you couldn't help but fall in love with her.

With tears in her eyes, she addressed her fellow nominees, saying: "To be in this category with these extraordinary women, and Glenn Close... you've been my idol for so long and this is not how I wanted it to be and I think you're amazing and I love you very much."

The actress added: "And any little girl who is practising their speech on the telly, you never know. I used to work as a cleaner and I loved that job, I did spend quite a lot of my time imagining this."

Olivia Colman wins and calls out her "idol" Glenn Close at the #oscars: https://t.co/T3YCU1WzbB pic.twitter.com/Svr7Sr0T0q

Let's get real, Aquaman star Jason Momoa pretty much melts hearts whatever he does, but he might have outdone himself here.

The actor caused a tizzy when he took to the stage (alongside a radiant Helen Mirren) sporting a blush pink scrunchie that perfectly matched his slick suit. You can't help but admire the coordination. 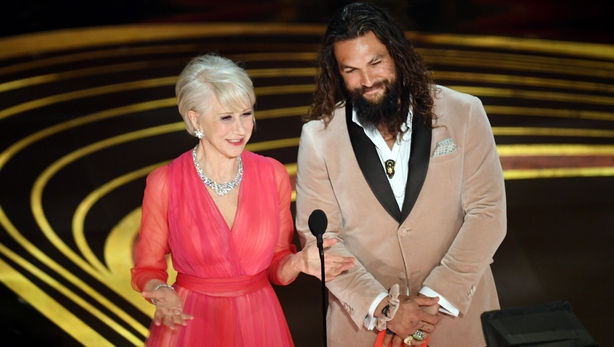 Check out the winners at this year's Oscars here, and take a look at our red carpet gallery here.

The Oscars are on RTÉ2 on Monday night from 9:30pm - and the speeches are limited to 90 seconds.