Liam Ó Briain was in an internment camp when he heard that a truce had been reached between British and Irish leaders in 1921.

The Truce of 1921 found some six thousand Irish men in prison all over Ireland and England. Of these, forty were facing the death sentence but the majority were internees being held indefinitely.

Liam Ó Briain was one such internee and had been imprisoned since November 1920, the day after Bloody Sunday. The day following Bloody Sunday, most people around Ireland still did not know about the events the previous day. Liam Ó Briain recalls how Black and Tans invaded the grounds of University College Galway (UCG) where he worked as Professor of Romance Languages, surrounded the buildings and took him away. After five months in Galway, he was transferred along with 120 other prisoners to The Rath Camp on The Curragh where he remained until the day after the Treaty was signed in December 1921 when all the prisoners were released.

Liam Ó Briain describes the conditions in the camp and how the internees passed the time. The Rath was a large camp holding between eleven and twelve hundred men. In general, conditions were not bad at The Rath, apart from the general lack of privacy. He recalls long days playing chess and waiting for news of "the tremendously exciting events going on outside".

News of a truce began to filter into the camp. Lloyd George had sent a letter to Éamon de Valera suggesting a truce, after the opening of the Belfast parliament when partition became a fact. During the subsequent meetings and discussions, internees in the camps and prisoners began to feel they were losing their grip. Something new was happening outside and the air was changing. The end of fighting seemed possible. However, for the prisoners inside, nothing was changing.

Liam Ó Briain recalls one day playing a game of chess with Desmond Fitzgerald when a military man came in looking for him and took him out. Shortly after, Fitzgerald returned and began to pack having been informed of his release. This occurred before the truce was declared. Arthur Griffith had requested his release to help with the negotiations leading to the truce. Desmond Fitzgerald was the envy of the camp.

Then the news came in that all TDs were to be released and there was to be a public meeting of Dáil Éireann. There were four of five TDs in the Rath who prepared to leave the camp. When they left, the remaining prisoners felt more removed from the outside world than ever.

We just couldn’t absorb the astounding items of news that began to come in.

News came in that IRA members had been spotted driving around with British officers calling themselves 'Liaison Officers’. 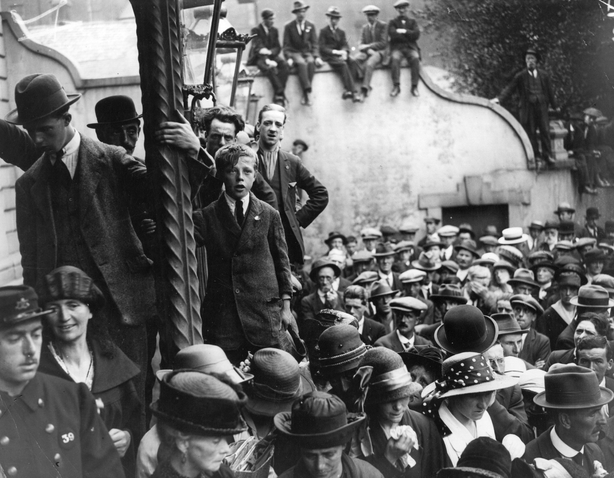 Six weeks following the truce was declared, Liam Ó Briain was granted parole to attend his brother’s funeral. This gave him a glimpse of this incredible new world. He saw the republican government trying to function from rooms in the Mansion House and spoke to various people in the know. All the men at the camp had told him to bring back some real news some of which he withheld from them. 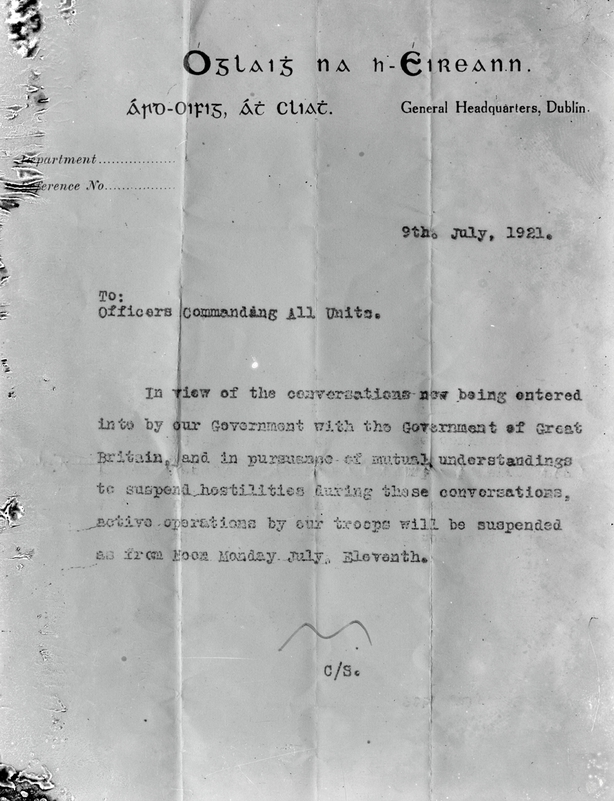 Copy of a letter from the Chief of Staff of the Irish Republican Army (IRA) suspending military operations against the British, dated 9 July 1921.

Liam Ó Briain recalled the events leading up to the Truce for this recording made by Proinsias Mac Aonghusa.