Clearing up on Dawson Street following a riot in Dublin caused by a breakaway group at a Bobby Sands rally.

Almost every shop in Dublin's Dawson Street has had windows smashed by some of the crowd who had been part of a Bobby Sands rally at the General Post Office (GPO).

The rally attended by over 1,000 ended at around 10 pm. A breakaway group of 100 people then ran across O'Connell Street causing damage to car and shop windows on Nassau Street, Grafton Street, Dawson Street and St Stephen's Green.

A red Fiat outside the Royal Irish Automobile Club is burned out. Other cars owners discover their vehicle windows are completely smashed. One man sits in his car contemplating his smashed windscreen.

According to An Garda Síochána a total of 23 shop windows and 21 car windows are damaged on Dawson Street.

An RTÉ News report broadcast on 6 May 1981. This footage has natural sound only. 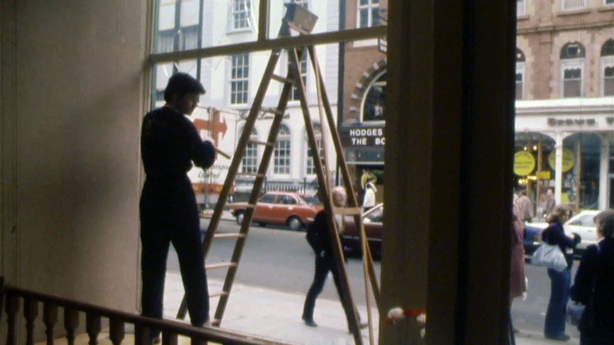