At a retrospective of his bronze sculptures and etchings in Dublin, the sculptor Michael Ayrton explains why the Greek myths of Daedalus are a dominant theme in his work.

The Lad Lane Gallery in Baggot Street, Dublin is the venue for a retrospective exhibition of bronze sculptures and etchings by the English author, illustrator, sculptor theatre designer and filmmaker Michael Ayrton.

A number of the works exhibited at the retrospective may be turned around and viewed from all angles. Michael Ayrton's bronze and perspex sculpture 'Discovery of Nautilus' means a great deal to him as it was his first use of mirrors in sculpture.

I don’t think actually anybody’s ever used sculpture in quite this way before. 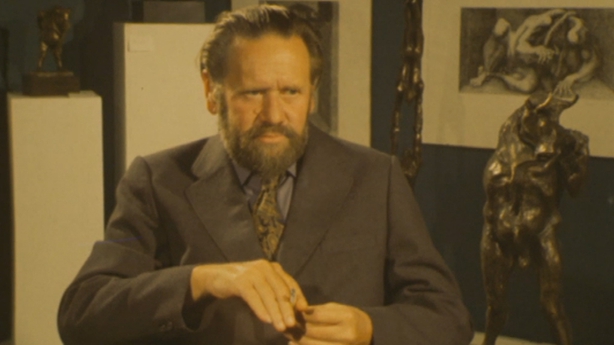 When in southern Italy, Michael Ayrton experienced a genius loci, the protective spirit of a place. This definitive experience informed him,

Michael Ayrton believes the human species has a need for mythology and the Greek myths of Daedalus, Icarus and the Minotaur have dominated his own work. Icarus’s father Daedalus the mythical Greek inventor, architect, and sculptor holds a particular appeal to Michael Ayrton because

He is the archetypal craftsman; he’s the first sculptor, the first inventor in legend, so he sums up all the qualities in a way that I suppose I would like to possess myself.

From the earliest times, Michael Ayrton says humans have created art to identify their own place in the world rather than to create on a decorative level. He believes this is definitely the case for his own art.

This episode of 'Last House’ was broadcast on 11 September 1975. The reporter is Tom McGurk.